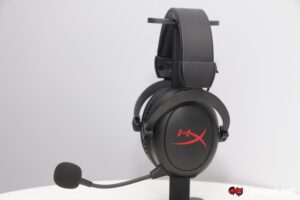 It’s been something of a hot minute since we last heard of HyperX after HP purchased the brand’s gaming peripheral division from Kingston. Of particular importance is the procurement of the gaming headphone division and in this case, the continuity of it through products like this Cloud Core Wireless.

To that end, there are a handful of questions that we’re dying to ask, chief among which being: despite a change in ownership, has HP managed to retain the same standard with the Cloud Core Wireless, or is it a completely different animal?

Much like the Cloud II Wireless, the Core Wireless keeps both the gaming headphone lineup and its design aesthetic alive, with its simplistic all-black look with the signature red accents. In all honesty, HP isn’t deviating or changing much of the headphone’s outlook, which  leads me to believe that HP could very well be a believer of the whole “if it ain’t broke, don’t fix” philosophy.

One difference between the Cloud Core Wireless and its wireless pre-Kingston predecessors though, is the placement of the button and volume scroller. Instead of dividing them across both earcups, all of its functions and controls are now situated at the rear of the left earcup. Speaking of earcup for a more comfortable experience.

In addition, you get the same detachable microphone, which is connected to the Core Wireless through a 3.5mm port. Additionally, the headphone also supports DTS:X Surround sound, which can only be activated via the DTS Sound Unbound app.

Compared to the Cloud II Wireless that I reviewed, the yoke on the Cloud Core Wireless is noticeably tighter, but not to the point where it feels like a vice is gradually being tightened on my head. All in all, it’s still very comfortable, even more so over long periods of use.

As for the overall aural quality of the Core Wireless, I’ll give it to you straight; these aren’t the best-sounding headphones I’ve experienced, but they are certainly far from the worst pair to cross my ears. There is an overall “muffling” of the headphones, where everything just sounds a little dampened, although The highs and mids are clear and can be made out but tend to fall short in certain tracks. Likewise, the lows on these earphones are present and, to my surprise, can be felt at the back of my skull, albeit having a rather tepid “oomph” factor to it.

For that matter, the Core Wireless does have a pretty high volume ceiling and for that matter, there’s no signs of the diaphragms breaking at higher volumes or any distortions whenever a bass-heavy tune comes into play.

One drawback to the Core Wireless that I notice is that there is no visual cue to indicate if the microphone is muted. In fact, the only way of finding out is by pressing the dedicated button behind earcup: one beep means you’re live and two beeps mean you’re dead to Discord, Zoom, and Microsoft Teams conferences.

Moving on, battery life for the Core Wireless could be better. HyperX advertises its battery life of 20 hours, which is 10 hours shorter than the Cloud II Wireless. While it does seem like a trend amongst headphone makers to reduce the endurance of its products’ operating hours (I’m looking at you, Sony), it is a practice I hardly care for.

Price-wise, it’s not the cheapest pair of gaming headphones at RM479. In fact, it’s actually on par with Razer’s Barracuda X, if not slightly more expensive.  On top of that, the 7.1 surround sound DTS:X feature is only accessible via the DTS Sound Unbound app and once activated, there is no way to disable it.

At RM479, it’s not wrong to say that you’re getting your money’s worth in features HyperX Cloud Core Wireless, but if I’m honest, it feels as if HP decided to half-arse said features and provisions. Once again, the LED at the back of the earcup only seems to ever light up whenever you are charging it, gradually changing from bright red to a static green light, indicating that the battery is fully charged.

Because of that, the Core Wireless feels a little two-faced: it’s a gaming headphone set that has all the chops, but at the same time, it feels a bit like a rush job, almost as though HP actively chose not to spend too much time tweaking it further. Having said that, this is a brand that has a lot of experience in audio products, let alone gaming audio devices, so I’m willing to overlook the issue, at least for another year or so.

That being said, I should reiterate that the Cloud Core Wireless isn’t a terrible headphone set. Again, if you were a fan of the HyperX branding back when Kingston still held the ropes, then you can expect more or less the same level of performance, comfort, and experience from these headphones.