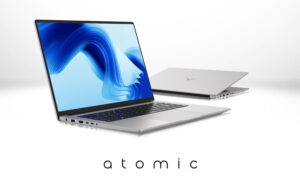 Illegear recently added yet another 16-inch laptop into its line-up by launching the new Atomic 16. While it may have the same screen size as Arté 16 that the company launched back in June, there are several factors that set them apart.

For starters, the Atomic 16 feature a 120Hz IPS panel with 2560 x 1600 resolution as opposed to Arté 16 which has a 240Hz 2880 x 1800 panel instead. The new model also relies entirely on the integrated Intel Iris Xe Graphics that come with its 12th Gen Intel Core processors while the latter is powered by either NVIDIA GeForce RTX 3060 or RTX 3070 Ti graphics.

While both models carry a 512GB NVMe solid state drive as standard, the base variant for Atomic 16 only has 4GB of RAM which is just a quarter of Arté 16’s 16GB RAM. In addition to that, they also utilize different types of memory altogether with Atomic 16 using DDR4 and Arté 16 going for DDR5.

Some may find this a deal breaker but only Arté 16 offers a USB-C port with Thunderbolt 4 support. Additionally, Atomic 16’s HDMI support is limited to 1.4 while Arté 16 goes up to 2.1 which allows it to deliver output with resolution as high as 4K at 120Hz.

Being a slightly lighter and thinner model at 1.55kg and 15mm respectively, we are not surprised that the Atomic 16 carries a slightly smaller 70Wh battery as opposed to Arté 16’s 80Whr battery. As a comparison, the latter weighs 1.62kg and has a thickness of 15.9mm.

The power output of their power brick is different too at 90W and 180W, respectively. Naturally, both models are being priced differently too.

Available for pre-order right away, the new Atomic 16 starts at RM3,299 which is significantly lower than Arté 16’s starting price of RM8,399. Just like any Illegear laptops out there, you can check out the customization option and purchase the Atomic 16 directly through the company’s official website.

The post Illegear Atomic 16 Goes Official With A Starting Price Of RM3,299 appeared first on Lowyat.NET.