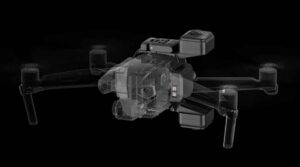 Insta360 has officially unveiled its latest product, the Sphere, which is a camera attachment that is designed specifically for DJI Mavic Air 2 or Mavic 2S drones. And as you may have expected, it will enable users to record 360-degree videos from the air, and in 5.7K resolution.

Don’t let its name mislead you though, as the product is nowhere close to being the shape suggested. The Sphere is a clamp-like attachment that features two Insta360 cameras which cover the drone’s upper and lower viewpoints. Insta360 says the locking mechanism is “ultra secure” and has no impact on the structural integrity of the Mavic Air 2/2S. In addition, it also assured that the device’s onboard system would not impede on the drone’s GPS signal or remote control system.

As mentioned earlier, the Sphere’s cameras are able to record 360-degree videos in 5.7K resolution, enhanced by the brand’s FlowState image stabilisation system – a feature that is also present on its ONE X2 camera which was released back in late 2020. Insta360 added that the system has been fine-tuned to ensure steady aerial footage regardless of the conditions.

One particularly interesting feature offered by the device is its ability to completely crop out the drone from recordings, therefore making it totally invisible in videos. Which is undeniably useful for content creators, especially for post-production. Apart from that, Insta360 also offers numerous editing styles that are designed specially for the Sphere, including the Inception and Dr. Strange-like Horizon Flip, as well as Tiny Planet, Sky Transition, Deep Track, FPV Roll and Dolly Zoom.

When in use, the company says the camera can operate up to 48 minutes when recording footage in 5.7K resolution, which actually exceeds the flight time of the DJI Mavic Air 2 and 2S. Charging the Sphere is done through a USB-C connection, which is claimed to take around 100 minutes for it to top up from empty to 100%.

The Insta360 Sphere is available now in the US and China, retailing at US$430 (~RM 1,889). Unfortunately, it is not known whether the company is planning to ship it to other countries including our own.