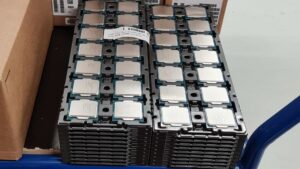 Intel’s 13th Gen CPUs are the current king of the hill when they come to performance right now, either by matching AMD’s Ryzen 7000 Series CPUs or even putting miles between them. Recently, the German tech site, Igor’s Lab found that the iGPU-less version of the chipmaker’s top-tier CPU, the Core i9-13900KF, was the best of the lot when it comes to overclocking.

Igo’s Lab conducted their tests in collaboration with MIFCOM, a system integrator based in Munich, Germany, and tested a total of 480 Intel Raptor Lake processors, and then proceeded to publish the binning data on the silicon quality of each CPU tier. For the uninitiated, binning is basically a term vendor use to categorise components, including CPUs, GPUs (aka graphics cards), or RAM kits, by quality and performance.

In the case of Igor’s Lab, the tech publication found that the Core i9 models contained the best silicon out of the entire 13th Gen K-Series CPUs, and that the 13900KF SKU was the best of the lot when it came to the business of overclocking. with an average Silicon Prediction (SP) of 101.1 out of the 164 tested samples. For that matter, even the worst-performing unit of the SKU had a score of just 91 points, which is still good. The 13900K, which comes with an integrated GPU, was just within a whisper behind its KF counterpart, figuratively speaking.

There’s also the 13700K and 13700KF, in which the delta between their average SPs was less than 1%. However, like the 13900KF, the latter was found to be the one with the better overclocking headroom.

With the Intel 13600K and 13600KF, though, the narrative had switched sides. In Igor’s Lab’s test, it was the iGPU-equipped mid-range SKU that had the higher SP average of 81.8, compared to the KF variant’s 78.5. Also, the 13600KF was found to have the worst sample of all the Raptor Lake units testing, with one sample scoring only 58 points.

We’ve only posted a couple of Igor’s Lab’s findings here, but you can check out their in-depth findings via the source links we’ve provided.