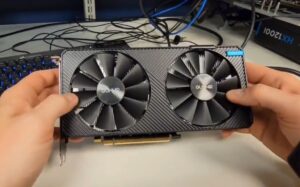 Intel’s ARC Alchemist graphics cards are, technically speaking, already available for purchase, with one small catch: they’re only purchasable in China, and while it is only the entry-level A380 GPU, it’s going to be a while before the rest of the world can get their hands on it. Surprisingly, Intel’s own US division clearly couldn’t wait and decided to jump the fence and bring in a couple of custom-cooled cards to their labs.

The card was presented by none other than Ryan Shrout, Graphics Community Engagement at Intel, and the ARC GPUs Shrout specifically decided to have shipped to Intel’s US labs were the GUNNIR A380 Photon graphics cards.

Got my hands on the retail version of the Gunnir Intel Arc A380 Photon 6G OC card. It’s only available in China right now so WW buyers might not see it locally, but the build quality is exceptional. Mainstream 1080pMed gaming, DX12 Ultimate, AV1 HW encode, solid value! #IAmIntel pic.twitter.com/88tgxducI9

As a quick recap, the A380 officially hit the Chinese market in June this year and is the first of Intel’s Alchemist GPUs to be released. The GPU is also a part of the chipmaker’s ARC entry-level tier, aimed at consumers that aren’t looking to break the bank but still want something that can deliver the framerates at a whim.

Specs-wise, Intel’s A380 comes with 6GB GDDR6 graphics and is powered by a full ACM-G11 GPU with eight Xe-Cores. Other specifications include a 75W TDP, a 96-bit memory bus, a memory bandwidth of 192GB/s, and a base clock of 2000MHz.

As this is an Intel-based GPU, the A380 also supports a folder of Intel-centric features, including Xe Matrix Extensions (XMX) AI Acceleration engines, XeSS, which is the company’s answer to NVIDIA’s DLSS and AMD’s FSR. Plus, Deep Link integration, which is essentially Intel’s form of the Resizable BAR or AMD’s Smart Memory Access technology. Oh, and support for PCIe 4.0 and DirectX 12 Ultimate, the latter for ray-tracing.

In any case, Shrout doesn’t really show off the A380’s prowess nor does he provide any performance metrics, save for the brief moment where he offers a glimpse of the GPU running PUBG, presumably at Full HD resolution and at Medium settings.

That’s based on the numbers obtained by a Chinese hardware reviewer, who managed to get their hands on the A380 early on. Price-wise, Shrout says that the card costs between US$130 (~RM575) and US$140 (~RM619), which is pretty reasonable. Of course, once it comes into our market, you can rest assured that those numbers will be higher.

The post Intel ARC A380 Graphics Cards Arrive In US Labs appeared first on Lowyat.NET.