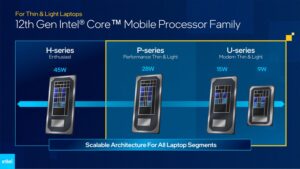 Intel divulged more detail about its latest additions to the Alder Lake Mobile lineup of CPUs, with these SKUs aimed towards laptops that favour thin and light designs, a high level of performance, and improved power consumption. This includes the P-Series and U-Series CPUs, both of which are follow-ups to Intel’s H-Series that was announced back in January.

As with all 12th generation Alder Lake processors, both the P-Series and U-Series are based on the Intel 7 process and use a combination of Golden Cove (P-Cores) performance cores and Gracemont (E-Cores) efficient cores. Of course, these CPUs will also be able to benefit from the new Intel Thread Director technology.

For the P-Series processors, Intel is setting its sights towards users that, once again, would prefer a laptop that, while power, isn’t weighed down by With the P-Series, the processor lineup will consist of six SKUs, with the top of the line model, the Core i7-1280P, sporting up to 14-cores, 20-threads, which are made up of six P-Cores and eight E-Cores. Interestingly enough, the lowest-tier CPU of the series, a Core i3-1220P, will ship out with a 10-cores, 12-threads configuration, made up of two P-Cores and eight E-Cores.

Of course, one of the more appealing features is the required TDP that the P-Series CPUs requires. Across the board, all CPUs under the series have a processor base power (Intel’s lingo to describe TDP) of just 28W but they can be boosted to 64W.

For CPUs under the U-Series, this series features processors that have a processor base power of just 15W, with room to go up to 55W, should the need for more power arise. The lowest tier CPU in the series starts with A Celeron 7305 and Pentium 8505, both of which feature a 5-cores, 6-threads layout comprising one P-Core and 4 E-Cores. As for its top-tier SKU, the Core i7-1265U, that CPU sports a 10-cores, 12-threads configuration, comprising two P-Cores and eight E-Cores.

As for when we can expect these CPUs, Intel says that we should start seeing them on the laptops of their vendor partners starting March this year, but didn’t specify any exact launch date, which it’s probably going to leave to said vendor to determine for themselves.

As an extra added bonus, Intel also gave a quick glimpse of its Evo Design Foldable Display concept, which is essentially a laptop-sized foldable display that literally all-screen. If the concept looks familiar, it’s probably because we first saw the concept being touted by ASUS many years ago at Computex. There isn’t a whole lot of detail about the product’s hardware, but hopefully, ASUS will be able to answer that question soon.