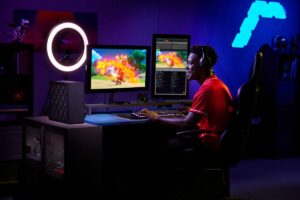 Just like previous generation NUCs, Intel’s NUC 13 Extreme Kits will house a 13th generation Intel Core desktop CPU, as well as have space allocated for desktop graphics cards that are at least 30.5cm in length and triple-slot in width.

On a related note, the Compute Element of the NUC 13 Extreme Kits will have three flavours of CPUs to choose from, starting from the Core i5-13600K, then the Core i7-13700K, and finally, the Core i9-13900K. We won’t go into too much detail about the specifications of each CPUs, as we’ve already reviewed two of them. Simply put, the new processors are still based on the chipmaker’s self-named Intel 7 process but its P-Cores are now the new and improved Raptor Cove cores, and have practically double the number of E-Cores over its Alder Lake predecessors. Moreover, the boost clock of all three CPUs sit comfortably above the 5GHz threshold, with the top-tier SKU capable of ramping up to 5.8GHz.