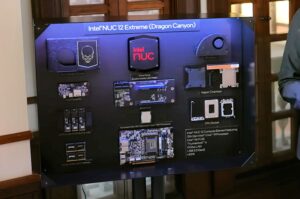 Back in CES 2022, Intel pulled back the veil from its NUC 12 Extreme – codenamed Dragon Canyon – its small form-factor desktop PC solution, that is set to be powered by its latest 12th generation Alder Lake CPU architecture. The only thing missing from the announcement then was the official hardware, that is until recently.

During the Investor Meeting 2022, where Intel also showed off its NUC 11 Extreme “Beast Canyon” PC that supposedly contained an ARC Alchemist GPU, it seemed that the chipmaker also let loose the official specifications of the NUC 12 Extreme. Specs-wise, the small form factor desktop PC will be rocking either a Core i7-12700 or a Core i9-12900 CPU, up to 64GB of DDR4-3200 SODIMM RAM, three M.2 M-key slots, two Thunderbolt 4 ports, six USB-A 3.2 Gen2 ports, a 10Gb LAN port (with an additional 2.5Gb port for Core i9 SKUs), and Intel Wi-Fi 6E AX211 support.

The only thing missing from that list is the presence of a dedicated GPU, to which the specs sheet shows a “PCIe x16 Gen5 slot for add-in discrete graphics” listed, and that it will support a card up to 12-inches in length. Given that the length of the casing is similar, if not identical, to the NUC 11 Extreme, it’s safe to say that the system will support cards such as NVIDIA’s GeForce RTX 3080 Founders Edition, at least in thickness and length. For another matter, the NUC 12 also seems to support DDR4 RAM, but not the latest DDR5 memory standard.