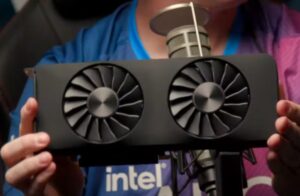 The exclusive reveal of the A770 Limited Edition was conducted during the latest Linus Tech Tips’ WAN Show episodes, where the TechTuber brought on Tom Petersen and Ryan Shrout, who had previously been on Gamers Nexus’ (GH) channel, where they facilitated the unveiling of the lower-tier A750 Limited Edition.

Basically, the reveal happens at around the 23-minute mark, with Shrout officially removing the card out of its packaging and unveiling the A770 Limited Edition in all its glory. Like its A750 counterpart, it uses the same cooler shroud design, complete with the dual-fan configuration at the front of the card. Side note and fun fact, Shrout and Petersen confirm in the video itself that those fans are RGB-capable, so if you’re the sort of person that likes turning your room into a rave venue, go ahead.

Moving on, the back of the card also sports the same clean design, with the card’s model emblazoned on the backplate, complete with the “Limited Edition” tag at the bottom of it. More importantly, it is clear that the card also uses 8-pin + 6-pin PCIe power port configuration, in order for it to run. Additionally, there also appears to be what looks like a microUSB header right next to the ports. For that matter, the heatsink on the card doesn’t appear to be too thick: at a glance, it looks like that it could just take up less than two slots.

Lastly, the A770 Limited Edition has four outputs ports in total; three of them are DisplayPort ports, while the last one is an HDMI port.

Beyond that, neither Petersen nor Shrout confirmed any hardware specifications of the A770 Limited Edition. Given how Shrout recently took to Twitter to squash any and all rumours of an A780 ever existing, it seems safe to say that the A770 is the top dog of the Alchemist series and to that end, it will be featuring a full-fat ACM-G10 GPU with all 32 Xe-Cores. As far as graphics memory goes, it seems likely that it will launch with 16GB GDDR6 memory and be on par with NVIDIA’s GeForce RTX 3070 Ti, at best.