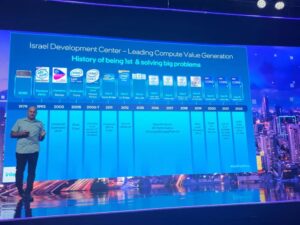 Over at Intel’s Technology Tour 2022 that is currently taking place in Israel, the semiconductor and chipmaker shared a slide about its upcoming 13th generation Raptor Lake CPU, along with other slides on their latest product, most of which are still under embargo. Getting back to the Raptor Lake slide, it contained the claim of a CPU that would run at 6GHz out of the box, and as a default.

In addition to the absurd 6GHz speeds, Intel also claims that it had already achieved a world overclocking record with said Raptor Lake CPU by pushing it to run at 8GHz. Naturally, all this was achieved via the use of liquid nitrogen (LN2). Notably, the speed that the chipmaker is claiming is faster than AMD’s recently announced Ryzen 9 7950X, which boasts an equally absurd boost clock of 5.7GHz out of the box.

Circling back to the high-octane Raptor Lake CPU, there isn’t any clear indication if this souped-up CPU will be hitting the market with the first wave of 13th generation CPUs or if Intel intends to release it as a special “KS” model, much like it did with the current 12th generation Alder Lake Core i9-12900KS. Additionally, the chipmaker still isn’t giving out too many details about the processor but has said that this model will have a 15% gain in single-threaded performance, a 41% gain in multi-threaded workloads, and an overall “40% performance scaling”.

Another reason for the increased focus on Raptor Lake was confirmed by industrial analyst Dr Ian Cutress, and it is honestly a rare admission on Intel’s part; the only reason Raptor Lake exists is that the chipmaker isn’t able to get Meteor Lake done or ready in time for launch. Seeing how its 13th generation lineup is essentially an improved version of its current 12th generation Alder Lake SKUs, that admission actually makes a lot of sense.

The post Intel Will Have Raptor Lake CPU That Runs 6GHz Out Of Box appeared first on Lowyat.NET.