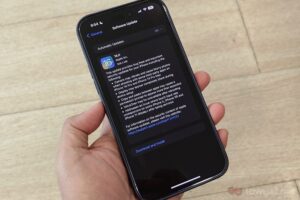 iOS 16 was plagued with two major bugs. One involves iPhones giving users frequent paste prompts, a result of a security feature gone wrong. Another affects the iPhone 14 Pro and Pro Max specifically, where some users report blurry photos and disconcerting noises from their cameras when running third party apps. Both of these major bugs, and more, are being squashed with the newly pushed out hotfix, iOS 16.0.2

To quickly bring everyone up to speed, iOS 16 introduced a security feature that has iPhones running the mobile operating system prompt users when an app tries to access the copy clipboard. This is meant to prevent malicious apps from getting access to sensitive data you may have copied. But instead, it pops up way more often than it is supposed to. Rather than prompting only when there is sensitive information, the prompt shows up every time a user pastes anything.

As for the camera issues for the iPhone 14 Pro and Pro Max, some users have reported that shots become blurry when using the camera feature of popular third party apps like Instagram, TikTok and Snapchat. Worse, the camera makes a disturbing grinding noise, which has been attributed to a fault of the second generation sensor shift image stabilisation tech. None of these are issues when using the default camera app, and not everyone with said devices face the issue. But it’s definitely a major concern for those who find their brand new phone’s camera rattling away.

These two issues, as well as three other less reported on bugs, have been fixed with iOS 16.0.2, or so Apple claims. The other three, as the update notes describe, involve the phone screen being completely black during setup, the VoiceOver feature becoming unavailable after rebooting, and a touch input issue involving a freshly serviced iPhone X, XR and 11. The update is already available for download, and you should probably get it if your device is affected by any of these issues.