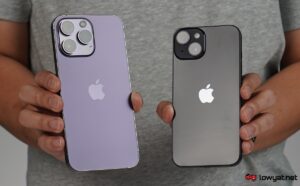 Barely two weeks after they were first unveiled to the world, the new iPhone 14, iPhone 14 Pro, and iPhone 14 Pro Max are now officially available in Malaysia. In general, this year’s model arrived in our market rather quick – just one week after the rollout in main markets such as the United States, Europe, and Singapore.

Hence, you are looking at a price difference of between RM300 to RM400. The increase in pricing also affects the higher-end iPhone 14 Pro and iPhone 14 Pro Max too although at a much higher rate as per what we have pointed out in our launch coverage.

So, that’s a price difference of between RM400 to RM700. In the same report, we have also pointed out that you may want to consider adding the price of a USB-C Lightning charger into your budget as well since Apple has stopped providing a charger alongside a new iPhone for the past two years.

All three of the new 2022 iPhone models are readily available directly from Apple Malaysia’s website as well as the big four telcos including Celcom, Digi, Maxis, and U Mobile. You can also get them from various Apple Authorised Resellers throughout Malaysia including Machines, Switch, iTworld (SNS Network), Thunder Match, All IT, senQ/Senheng, Harvey Norman, Lazada, and many more.

One more thing: don’t forget to update your iPhone 14 Pro and iPhone 14 Pro Max to iOS 16.0.2 before you start using third-party camera apps. Else, you may experience the rattling camera phenomena although do note that this does not happen to all units out there.