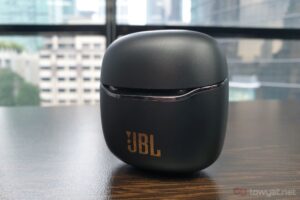 The true wireless stereo (TWS) earbuds market already has a lot of players, with products catering to all sorts of price ranges. And for our local market, high expectations are naturally placed on products that breach the four-figure price barrier. JBL, an established name in the arena, has stepped into the ring once again with the Tour Pro+ TWS buds. And it’s an entry that comes with a price tag of RM1099, so needless to say, expectations were set.

Announced relatively late last year, the JBL Tour Pro+ is the brand’s latest entry in the TWS buds market. It’s pretty much built for every use case scenario out there, and as a result, is pretty feature complete. It’s got an IPX4 rating so you can use it while working out. It’s got ANC, which feels mandatory for something at its price range. It’s got three mics on each bud to help with its ANC capabilities, and for when you need to take calls with it on. And of course, it has touch controls and a charging case to give it extra juice when it runs out.

On the subject of juice, the official battery life of the buds alone is eight hours, with the case giving it 30 more. You charge it with a USB-C cable, or if you have one, a Qi wireless charging pad.

Beyond sound quality, the recipe for a good pair of TWS buds is usually pretty straightforward. And I’m glad to say that JBL has done a good job with the Tour Pro+, but this extends to more than just the buds. The case actually is deserving of praise, so let’s start there.

As mentioned, it supports Qi wireless charging. It’s not the most groundbreaking of extra additions, but it’s worth mentioning. But beyond that, the case is actually quite well designed. It has a vaguely oblong tube-like shape to it, and since all of its corners are rounded, it sits very comfortably in hand, in any orientation. Its weight is also balanced in a way that lets it sit upright as well, though this stops working when you pop the lid open.

But when you do, you see not only the two earbuds but also an LED indicator for each one, displaying their pairing status. Again, not a massively big deal, but it’s not only convenient for when you need it, but it also adds to its aesthetics.

Going back to the buds themselves, as mentioned, they are pretty feature-complete. They have the aforementioned ANC, as well as an ambient mode that does the opposite. Both modes work well enough, but for the most part, you can just leave ANC off. Being earbuds, the JBL Tour Pro+ has good enough noise isolation that you wouldn’t need ANC for most day-to-day situations. Ambient mode is always nice to have, but again, at its price, you expect it to be there even if you don’t use it.

I had them on for about two hours straight every day on average while reviewing them, and it has been a comfortable experience. The total battery life of the buds and case combined easily matches what’s written on the lid. The fit is not tot bad either, providing the noise isolation mentioned earlier. That being said, you’ll have to twist it downwards once you pop it in to get that snug fit, or they’re liable to wiggle their way out while you chew your food or snack, for example.

On the rare occasion that you’ll need to wear only one bud at a time, you can. The JBL Tour Pro+ then turns into a mono earbud. Of course, that is a very niche use case scenario that completely defeats the purpose of them being stereo buds.

As is also getting common these days, to make full use of everything the JBL Tour Pro+ has to offer, you need to download the JBL Headphones app onto your phone. This is especially because it has three sets of gesture controls that you can switch between – Ambient Sound Control, Playback Control and Volume Control. But you only have two buds, each taking only a few input types – tap, double tap, the occasional triple tap, and hold, the last one usually being reserved for your voice assistant. We’ll come back to this in a bit.

The Sounds Quality. Talk To Me.

Of course, it wouldn’t really matter that the JBL Tour Pro+ had a great case if the buds themselves don’t produce great sound. Fortunately, the audio quality is good enough that you didn’t read the last two paragraphs for nothing.

Actually, saying that it’s good enough is doing it quite a disservice, and that’s because this pair is actually more than that. In fact, it would almost completely justify its asking price. The sound is pretty well balanced, so you get good lows, mids and highs all around. Sound staging is pretty good too.

That being said, it has a weird quirk of its own. Usually with TWS buds, you can tell if a pair has a bias, either towards bass or treble. But with the JBL Tour Pro+, it seems to jumble things up, amplifying different frequencies depending on the track you’re playing.

To fix this, you’ll need the JBL Headphones app. More specifically, you need to select Audio Mode in the Smart Audio & Video menu from within the app. This brings balance to the sounds the buds produce, so you hear every element of a track, without it amplifying or suppressing different sound frequencies. You’ll also get custom equalisers in the app, as you’d expect; a couple more reasons why getting the app is mandatory to get the best out of these TWS buds.

To find something to complain about the JBL Tour Pro+ would mean to be nitpicky, so here goes. One thing I dislike is the fact that it absolutely needs the app to work its best. Most important of all is the aforementioned access to the Smart Audio mode. The difference in the quality of sound you get between having it and not is nearly night and day.

Going back to the bit about gesture controls, the first time I paired the buds to my phone, I got access to Ambient Sound Control on the left bud, and nothing on the right. I unpaired them and paired them again, and now I got playback controls on the right, and nothing on the left. The app lets you assign what controls you get, so that you don’t have to experience that randomness.

The gesture controls themselves are also pretty basic, working on taps and holds only. If you’ve experienced some of the other TWS buds in the market, you may be familiar with swipe gestures. There’s none of that here, which could be a minus point if you particularly like swipes. Especially for volume control, swiping up and down to increase or decrease certainly makes more sense. At least when compared to dedicating one bud entirely to it, and then assigning single taps and double taps to increase and decrease the volume, respectively.

The JBL Tour Pro+ is an impressive pair of TWS buds. Though at its price, it certainly faces stiff competition from other equally good buds in the bracket. A few that immediately come to mind include the Sony WF-1000XM4, the Klipsch T5 II, and the much pricier Sennheiser Momentum True Wireless 2.

But, it’s safe to say at that point that they all sound very good, and which you should pick is really a matter of preference. Though if you have none, and just want another reason to pick the JBL Tour Pro+, you have the sweet case tilting things in its favour.

The post JBL Tour Pro+ Review: Almost As Good As Listening To Pros On Tour appeared first on Lowyat.NET.