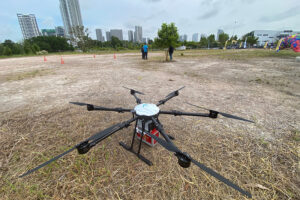 The Drone and Robotics Zone Iskandar (DRZ Iskandar) in Medini has officially opened its Drone Test Sites (DTS). The facility is projected to bring in RM315 million in investments from over 70 drone and robotics companies and generate 1,000 jobs by 2025, accelerating Johor’s growth towards becoming a regional and global business hub.

According to Johor Menteri Besar Hasni Mohammad, Iskandar Investment Bhd (IIB) has spent almost RM4 million developing DRZ, in addition to an allocation by the state government for the development of the drone and robotics ecosystem. “It will fast track the testing of locally developed drone-powered solutions and provide a safe and real environment for innovators to test, fly and try new ways for unmanned aircraft to integrate into our airspace safely,” said IIB CEO Khairil Anwar Ahmad.

DRZ Iskandar has two sites meant for different drone tests. DTS 1 is approximately 25 acres and caters to “Visual Line of Sight” flights while DTS 2, measuring at a staggering 1,700 acres, is meant for “Beyond Visual Line of Sight” flights, the first site of its kind in Malaysia. With that size, DTS is said to be the largest drone zone in both Malaysia and Southeast Asia.

Aside from drones, the zone also has test sites for autonomous vehicles and robotics. Outfitted with Autonomous Vehicle Test Site (AVTS), there are roads stretching 5km and 20km respectively that are specifically designated for AV testing.

DRZ Iskandar was launched in December 2020 by IIB, Malaysian Global Innovation and Creativity Centre (MaGIC), and logistics company DHL, which has also worked at commercialising cargo drone deliveries in Malaysia.