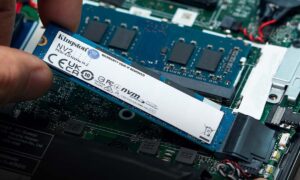 Kingston this week announced the NV2, its latest SSD entry and successor to last year’s model, the NV1. Like its predecessor, this new M.2 SSD is entry-level system storage aimed at consumers looking for an affordable storage expansion option.

Regarding its specifications, the NV2 is available in four storage capacities: 250GB, 500GB, 1TB, and 2TB. For its sequential read and write speeds, we’re looking at nearly double the read speeds and an increase of more than 1GB/s with its write speeds. Compared to the NV1, and that is for the 2TB variant of the SSD. To put it in another way, we’re looking at high-end PCIe 3.0 speeds now being crammed into PCIe 4.0

It’s the same story for long-term use and endurance for the NV2 but again, this aspect differs for each of the four capacities. Specifically, the 250GB model has an endurance rating of 80TB, the 500GB is 160TB, the 1TB last for 320TB, and the 2TB highest of them all at 640TB.

Sadly, unlike the NV1, the one feature Kingston isn’t bundling with the NV2 is a free copy of Acronis’ True Image HD cloning software, which is really driving home the idea that the memory maker wants this PCIe 4.0 SSD to be considered more as an option for expansion, rather than being used as a replacement main system replacement for the OS.

At the time of writing, Kingston has yet to provide us with the official starting price for the NV2. However, if it intends to stick to its guns, we could be looking at something within the RM250 range for the 250GB model and just shy of RM1000 for the 2TB model. That said, if you’ve got your eye on something that is vastly more powerful from the same brand, there is also the KC3000 that we reviewed earlier in the year. The peak model boasts a sequential read and write speed of up to 7000MB/s, across the board.