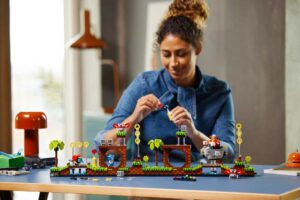 Following the leak earlier in the week, LEGO is now officially unveiling its Sonic The Hedgehog Green Hill Zone set. And it is set to be available very soon too. The company currently plans to release it as soon as the New Year comes.

As mentioned before, this Sonic set came about via the LEGO Ideas platform, where fans come up with, and vote on, the sets that they want the company to make. This particular one, according to the company, was conceived by Viv Grannell from the UK. It has gotten the required 10000 votes for the company to consider actually making a purchasable set.

From the box that was leaked earlier, we saw that the set will come with a few rings and Dr Robotnik, as well as Sonic himself. According to LEGO, the set will also come with mini figures of Crab, Motobug, and the Phantom Ruby. As part of the set, there will also be a Technic lever on the spring to launch pieces into the air the way they do in-game. Just be sure to catch them before they hit the floor.

The LEGO Ideas Sonic The Hedgehog Green Hill Zone set will be available starting 1 January 2022, for the price of US$69.99 (~RM293). The company usually provides us with local pricing for new sets, but at the time of writing we haven’t heard anything yet. The Malaysian website also doesn’t yet have the set listed, but hopefully that changes soon.