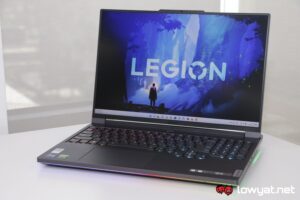 The Lenovo Legion 7i 2022 is special for a couple of reasons. Chief among those reasons is that this is the first gaming laptop in our lab that houses Intel’s greatest and most powerful 12th generation mobile CPU, the Core i9-12900HX. And yes, I am aware that Intel’s 13th generation desktop CPUs just recently made headway and by virtue of its existence, an announcement of the lineup’s mobile series processors is not far off.

Of course, none of that detracts from the fact that this Legion 7i is still one of the most powerful 12th-generation Intel-powered laptops on the market, and it is in our labs to be reviewed. So, let’s get to it.

It should be mentioned that there the Legion 7i comes in a couple of hardware configurations. As stated at the beginning, the unit I have in my lab houses Intel’s currrent top-of-the-line 12th generation Mobile HX series CPU, the Core i9-12900HX. The other model comes with a Core i7-12800HX but based on what is being listed on the brand’s official product page, the options for other components remain the same.

If you’ve followed Lenovo and its Legion lineup closely, you’ll know that, much like other brands such as Razer or MSI, the company rarely strays very far from its design aesthetics. On that note, and like all other Legion laptops for the last several generations, the Legion 7i retains that protruding spine chassis, with the back housing most of the machine’s I/O ports.

The Legion chassis, now with RGB.

One thing that sets the Legion 7i apart from past models, such as the Legion 5 Pro that I reviewed last year, is that this chassis comes with the one visually blinding feature that is the norm for many gamers: diffused RGB LEDs. The laptop now has a diffused RGB light strip installed in the undercarriage of its base and yes, it vomits all spectrums of the rainbow.

That generosity with RGB also extends to the Legion 7i’s keyboard but also in keeping with Lenovo’s internal laptop trend, it’s a full-sized keyboard, complete with numerical keypad. This also means that the typing experience is tighter than the typical ten-key-less design that most laptop manufacturers adopt, but at the very least, this means that you get a dedicated Print Screen key as part of the layout. Yes, I do think that this is important.

For another matter, the Legion 7i is noticeably thinner than other Legion gaming laptops; the vent cutouts are still there, but there are less obvious and look more uniform in its design. As I mentioned, the spine of the laptop’s base houses all the ports from Lenovo’s proprietary power port to the HDMI 2.1 output. Along its sides, you two SuperSpeed USB-C ports on the left, while on the right, you get one of the same port, along with the 3.5mm audio combo jack and the shutter switch for the webcam.

One design factor I do like about this Legion 7i is the anodised aluminium touches that Lenovo has added to the areas where the ports reside. It’s a small, if not minor addition to the laptop as a whole, but I find that it adds on to the whole “premium” feel of it. That being said, the Legion logo that is embedded into the back of its panel feels a little tacky, if not a little excessive. But to each their own.

Let’s move on to the 16-inch display panel of the Legion 7i. Just like the previous Legion laptop I reviewed, the panel on this one is WQXGA IPS and has an aspect ratio of 16:10, and that in turn translates to more display per square inch within a 15.6-inch chassis. On top of that, colours that appear are punchy and really pop out.

As a daily driver, the Legion 7i is, beyond a shadow of a doubt, a competent and fully capable workhorse. The typing experience, when I enter into a tunnel-vision mode that sees me typing, editing images and articles, is comfortable enough that my fingers don’t feel fatigued over long periods. The per-key RGB notwithstanding, I find the balance between the keyboard’s linear and clicky profile, along with the key travel distance to the point of actuation just nice.

The full-sized keyboard is visually pleasing, comfortable to type on, but as always, feels a little cramped.

That being said, an age-old issue that arises – I am assuming that this is true for a fair number of you out there – is that because the Legion 7i is housing a full-sized keyboard, the typing experience can feel a bit confined, especially if you’re used to the typical TKL layout, both for the desktop and laptop. As such, a learning curve is inevitable.

At this stage, there is one issue I would like to address a technical issue about the Legion 7i, and that is the Intel chipset residing beneath the hood. To be clear, the issue isn’t exclusive to the laptop itself but rather, it’s little hitches and “hiccups” that I’ve noticed to be prevalent in machines powered by the 12th generation Alder Lake mobile, and that included the ASUS Zenbook 14X OLED Space Edition that I reviewed not too long ago. With every program that I open up, the execution is never immediate and always accompanied by a slight lag – or delay, if you want to be specific – that lasts anywhere between a fraction of a second to a full two. And as much as it pains me to say it, the AMD Ryzen-based laptops that I use do not have this issue.

The good news is that there is a workaround to the issue: keeping the Task Manager window open actually eliminates the issue altogether, though it goes without saying that said issue should exist in the first place.

As for the gaming side of the Legion 7i, there isn’t a lot to say about the capability and performance of a laptop of this calibre. The combination of the 12900HX and RTX 3080 Ti, coupled with the maximum resolution of 2560 x 1600 pixels, means that this laptop can be described as nothing short of a beast. On average, virtually every game in my testbed library consistently held frames above 60 fps on 1600p, with the exception being Cyberpunk 2077, which I already expected to happen, given the intense and demanding nature of the title’s visual requirements with ray-tracing turned on. And that is to say nothing of the high refresh rate offered by the panel.

The trade-off to churning out stable and consistent frames is, naturally, the generation of an absurd amount of heat. For the Legion 7i, the 12900HX peaked at 99°C, while the RTX 3080 Ti itself was a little more well-behaved, limiting itself to around the 80°C mark. All this could be felt on the upper half of the laptop’s base, by the way. On a related note, the cooling system will get extremely vocal and almost to the point where you can actually hear coil whine from the axials of the fans.

To be fair though, I set the laptop to run in the overclock setting when plugged in, meaning that if it were left to run in the default Auto mode, it is actually slightly less aggressive, but not by a whole lot.

Appalling battery life despite having a 99.9WHr battery.

Perhaps the most disappointing aspect of the Legion 7i is its battery endurance. On a full charge, the laptop barely lasts four hours dwindling down to single-digit power, and this was just for general activities including web browsing, streaming videos, replying to emails, and writing articles. This average, by the way, was also obtained with Battery Saver or Eco Mode active throughout the whole time I was away and had no access to an adapter or a wall socket.

I would say that this is perhaps the price to pay for having the top-tier Intel 12900HX mobile CPU in the Legion 7i, but if AMD’s own Ryzen 9 6900HX mobile processor is able to give me between eight and 11 hours of use on average, I see no reason why Intel cannot do the same with its own product.

At RM15283, I can certainly think of a couple of other laptop brands that could give the Lenovo Legion 7i a run for its money and do it while sporting similar hardware specifications.

Announced back in May, the refreshed Blade 15 bears all the hallmarks of a laptop made under Razer has, and then some. Unlike the Legion 7i, it is fitted with a Core i9-12900H, but does ship out in a configuration that houses the RTX 3080 Ti.

In terms of pricing, the GE67HX will set you back RM13499 but in all fairness, that is still slightly cheaper than what the Legion 7i costs and way less than the Razer Blade 15 2022.

As is the case with all top-end gaming laptops, the Lenovo Legion7i is the epitome of power, performance, and to a lesser extent, portability. I say lesser because despite being just 15.6-inches in size, it still leans towards the side of heavy at 2.5kg. Of course, that doesn’t change the fact that this is a laptop of unbridled power with a pretty severe issue of battery endurance.

The Lenovo Legion 7i is a top-tier laptop that promises power but at an exorbitant asking price.

Naturally, there are some drawbacks to the Lenovo Legion 7i, one of which is the heat and noise generated by it when put to the task. Well, that and the fact that this highest-range SKU basically retails for just a little over RM15000. To be fair, though, that is more or less the typical retail cost for a gaming laptop of this calibre, and as our benchmarks show, you won’t be left wanting or craving for something more powerful. At least, that is until the next best thing comes along, but that’s unlikely to happen for the next several years. So, if you think your wallet can handle the blow and you’re ready to take the leap with Lenovo, then this laptop might as well have your name on it.