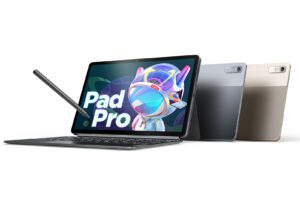 Alongside the new Legion Y70 smartphone, Lenovo has revealed its latest tablet, the Pad Pro 2022. When compared to its predecessor, the new model comes with a slightly smaller display but offers a higher refresh rate.

The Pad Pro 2022 sports an 11.2-inch OLED display with a peak brightness of 600 nits, a 5:3 aspect ratio, and a refresh rate of 120Hz. Built with an aluminium frame, the new tablet also has magnetic support for a stylus on both the side and back of the device alongside four JBL-tuned speakers that support Dolby Atmos.

The tablet lacks a 3.5mm audio jack and it is unclear if it has a fingerprint scanner, but it does offer face unlock. Running on ZUi 14 based on Android 12, the Pad Pro 2022 supports Wi-Fi 6 and Bluetooth 5.1, but does not come with NFC capability.

Under the hood, Lenovo equipped the Pad Pro 2022 with a MediaTek Kompanio 1300T which is a 5G-capable chipset but the company somehow decided not to enable it for this release. Paired with up to 8GB of RAM and 128GB of storage, it has a microSD slot for storage expansion up to 1TB.

While last year’s model held a total of four camera sensors, the Pad Pro 2022 only has two including a 13MP autofocus shooter on the back and an 8MP fixed focus selfie camera for video calling. The tablet is powered by an 8,200mAh battery that supports 30W fast charging via USB-C although it is slightly smaller when compared to its predecessor’s 8,600mAh battery. There are also pins on the rear to magnetically attach a keyboard case.