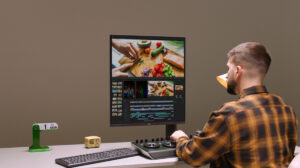 LG has announced that its DualUp Monitor Ergo is now available for the Malaysian market. Just in case you missed our coverage from last year, what’s unique about this particular model is its unusual 16:18 aspect ratio, which is designed to emulate a multi-monitor setup via a single display for multi-tasking purposes.

But unlike ultra-wide screen devices such as the Samsung Odyssey Neo G9 which enables two screens to be placed side by side, the DualUp achieves this by stacking them on top of each other instead. According to the South Korean tech giant, this design approach is more feasible in terms of ergonomics, as it can reduce neck pains that are often caused by side-to-side head movement.

In terms of specifications, the DualUp Monitor Ergo sports a 28-inch Nano IPS display with 2560 x 2880 pixel QHD resolution, which LG dubs as the “Square Double.” With this, the monitor offers the same screen real estate as two 21.5-inch screens that are stacked on top of each other. Additionally, the panel features 98% DCI-P3 colour gamut coverage, HDR10 compatible, and is capable of providing up to 300 nits of brightness.

Also onboard the display are two 7W x 2ch stereo speakers with WavesMaxxAudio enhancements, an ambient light sensor, a Live Colour Low Blue Light feature, and a PBP (picture-by-picture) function that enables users to divide areas necessary for their work. Connectivity-wise, the DualUp Monitor Ergo comes with a multiport for HDMI, DisplayPort, and USB 3.0, as well as USB-C with power delivery, and a 3.5 headphone jack.

Included together with a new and improved LG Ergo Stand, which comes with better tilting, swivelling and extracting features than its predecessor. Furthermore, this wide range of positions allows users to customise the height, angle and depth of the monitor to further enhance its ergonomics based on their personal preference.

The new LG DualUp Monitor Ergo is now available in Malaysia at a suggested retail price of RM 2,948. Those interested can purchase the monitor through the brand’s official stores on both Shopee and Lazada e-commerce platforms.