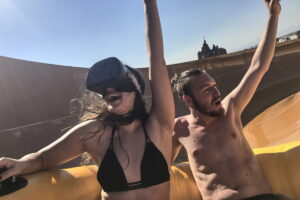 We have experienced wearing a virtual headset on a roller coaster before but wearing one while going down a water slide? Well, that is something new to us and it is one of the attractions offered at the SplashMania water park that will be opened at Gamuda Cove township in Banting very soon.

Called Atlantis VR, it is one of 39 water slides and rides that visitors will be able to enjoy at the 18-acre water park which was developed with the help of experts from Polin Waterparks and ProSlide Technology. Very few details about the virtual reality ride have been revealed to the public but it was described as a 250-meter virtual journey through the fabled lost city of Atlantis.

We took the liberty to dig further for additional information and have since learned that Polin Waterpark’s parent company, Polin Group has another subsidiary called Polin Game Technologies. The outfit has indeed developed several interactive applications for water parks including a virtual reality solution called Splash VR.

Developed through collaboration with French company Polymorph Software, the solution was first implemented way back in 2017 at the Land of Legends water park in Antalya, Turkey. The content for the VR water slide at that park was Atlantis-themed too which made us believe that it will be adopted for the implementation at Gamuda Cove SplashMania as well.

According to both companies, the Splash VR technology provides a full 360-degree experience and comes complete with tracking capability that has been customised to the layout of the specific waterslide. Polymorph was also responsible for the design of the waterproof virtual reality helmet used for Splash VR.

On a related note, Gamuda Land will also roll out a dedicated app for the water park called GL Play that allows visitors to purchase tickets ahead of their visit. In addition to having the ability to check out the park’s map, they also can purchase food and drinks directly through the app.

SplashMania is currently scheduled to be open in January 2023 although the ticket pricing is currently still a mystery. The easiest way to get there is via the ELITE Expressway and it should not be hard to spot its location from the highway as you will be able to see the water park’s massive ship replica from far away.