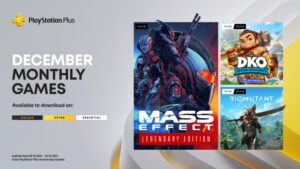 We have stepped into December, which is about as good a time as any to take a look at what games PS Plus subscribers are getting for free. And according to the announcement by PlayStation Asia, the biggest title in the lineup is the one without a PS5 version to go with it.

And the game in question is Mass Effect Legendary Edition, a remastered collection of the original trilogy in the series. This should require no introduction, and is definitely one to pick up if you’ve never experienced the trilogy before. It’s also a great inclusion into the PS Plus Essential lineup since this is not only the three games remastered and bundled into one, but they also come with most of their DLC released over the years.

The remaining two games that make up the PS Plus free games lineup this month are Divine Knockout and Biomutant. The former is a platform fighter which will only be released on the day this is claimable. But what sets Divine Knockout apart from the rest is the fact that it’s one of the rare 3D platform fighters, in a sea of mostly 2D variations of the formula.

Last on the list of PS Plus free games this month, the aforementioned Biomutant, was developed by Experiment 101 and published by THQ Nordic. It’s an Action RPG title that makes use of some interesting mechanics. For example, if you create a large character, it will be slower but able to take and deal more damage compared to a smaller character. On the flip side, there are some familiar RPG mechanics like a karma system and an alliance system that will give the game some variation.

Your PlayStation Plus Monthly Games for December:

All of these games will be claimable by PS Plus subscribers starting 6 December of 2022. If you haven’t yet claimed last month’s games, which stars Nioh 2, now’s as good a time as any to do so.