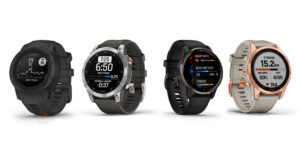 It appears that Garmin could be unveiling quite a number of new smartwatches sometime soon. These may include a new variant of its Venu 2 series which launched locally back in May, as well as next generation Fenix, Epix, and Instinct models – according to a massive leak by WinFuture.

The first from the list is the Garmin Venu 2 Plus, which appears to be a slight update from the original line-up. WinFuture notes that this particular model comes with an OLED screen and also sports an additional button, although its functionality is not known at this time. Based on the leaked images, details on the watch suggest that it would feature a 43mm model, has water resistance of 50 meters, Gorilla Glass protection, features stainless steel material, and – as expected – comes with built-in GPS and multi-GNSS support. Unfortunately, not much else regarding the Plus variant was provided by the publication.

Next is the next-gen Fenix series which allegedly consists of the Fenix 7, Fenix 7S and Fenix 7X. However, WinFuture did not provide any images of the 7X model, although it is likely that it would sport a similar design to its siblings. According to the leak, the series would feature 316L stainless steel material, solar charging capability, 100-meter water resistance, MIL-STD-810 rating. It is also revealed that the standard Fenix would come in a 47mm size, while the 7S model in 42mm. While mostly unconfirmed, it is expected that all three models would come with the usual health and fitness features, as well as satellite tracking and navigation.

The third model is the Garmin Epix Gen2, which is a successor to the brand’s original Epix model that was released all the way back in 2015 – now, in smartwatch format. As exciting as it sounds, nothing much is revealed about this next-gen model apart from what is visibly suggested by the leak. On that note, the Gen2 is shown to feature a fiber-glass reinforced polycarbonate body with 316L stainless steel material and a five-button setup. It would also come with a variety of health and fitness features such as heart rate monitoring, sleep tracking and blood oxygen saturation, as well as water-resistance up to 100 meters.

Lastly, we have the Garmin Instinct 2 and Instinct 2S, which – like the Fenix series – are likely offered in two different sizes for each model. WinFuture’s leak reveals that the watches would feature e-ink displays, MIL-STD-810 certification, and a solar charging capability. The new Instinct 2 series is suggested to also come with built-in GPS support, as well as a variety of health and fitness tracking capabilities and features.

As for when we’ll be expecting to see these new smartwatches, WinFuture suggests that Garmin may officially unveil them in early 2022. Chances are, it is quite possible that the new wearables could debut during the upcoming Consumer Electronics Show in January.