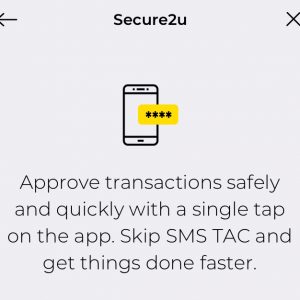 Maybank made its Secure2u authentication feature available on its MAE app back in April last year, in addition to the Maybank2U MY app. Though it looks like the bank is making it so that the former will be the only way to activate the feature.

In an update to the feature’s page on its official website, Maybank says that Secure2u activations will be permanently moved from the M2U MY app to the MAE app. This will go into effect starting 26 September.

This only affects new activations, so if you’re already using Secure2u on the M2U app, you can continue doing so for as long as you keep using the same device. Though if you so choose, you can also activate it again on the MAE app. In fact, in the FAQ section, Maybank says that it strongly encourages users to switch to MAE for all Secure2u approvals.

If you’re a frequent user of Secure2u, and you need it activated on a new device, then you should do so as soon as possible. Starting 8 October, Maybank is adding a 12-hour activation period to the feature. This means that if you activate the feature on a new device after the aforementioned date, you’ll have to wait for half a day before you can use it. The bank says that this is to help prevent unauthorised approvals.

If you’re unfamiliar, Secure2u makes it so that transactions via your Maybank2u account can only be approved by the device it is activated on. This is implemented in lieu of SMS TAC so that risk factors associated with it, such as SMS fraud and interceptions, are reduced. You can find out more about it, as well as the upcoming changes to the activation of the feature, by heading to the official Maybank web pages linked below.