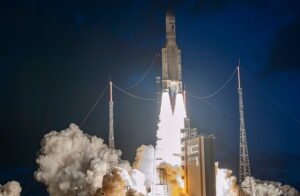 MEASAT together with its partner Arianespace has officially announced that the launch of MEASAT-3d is a success. The launch which has been designated as Mission VA257 took place at 5:50 AM Malaysian time this morning which is around 47 minutes after the start of its launch window.

Alongside MEASAT-3d, Mission VA257 also carried the NewSpace India’s GSAT-24 satellite and together, they formed a total payload of approximately 10,863kg. Built by Airbus Defence and Space, the MEASAT-3d deployment process began with its arrival at the Arianespace facility in Kourou, French Guiana more than a month ago on 13 May.

The satellite was then fuelled up on 30 May before it was loaded into the Ariane 5’s Sylda payload adapter on 8 June. The launch took less than 40 minutes to be completed as Arianespace officially confirmed the separation process for MEASAT-3d at around 6:21 AM while the first signal from the satellite was received at 6:41 AM.

With a total project cost of RM1.2 billion, one of MEASAT-3d’s biggest objectives is to improve the Internet experience for rural areas that are not being served by traditional telcos due to various reasons including but not limited to economical, infrastructural, and logistical challenges. Hence, this is why the satellite has been equipped with a Ka-band High Throughput Satellite (HTS) payload that provides a broadband capacity of 30Gbps for MEASAT to serve the nation.

The increased capacity allows MEASAT to improve the performance of its CONNECTme service from the existing 30Mbps to 100Mbps per user. The company has also set four Ka-band HTS Gateways in its headquarters at Cyberjaya as well as Rawang, Kuching, and Lundu specifically for its broadband operations.

Even though the launch has been deemed a success, the satellite is still in its geo-transfer orbit. MEASAT noted that it will take a few more days before MEASAT-3d arrived at its geostationary orbit slot of 91.5°E which it shares with MEASAT-3a and MEASAT-3b while commercial operations will only begin after another round of testing that will take around one month.

The post MEASAT-3d Launch Is A Success: Opening The Path For 100Mbps Broadband In Rural Areas appeared first on Lowyat.NET.