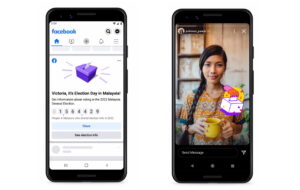 Given its ownership of Facebook, WhatsApp, and Instagram, Meta is generally the biggest digital communication company out there. Hence, it is hard to deny the ability of these platforms to shape the public conscience to a certain extent and their role could become even more critical during events that may have a huge impact on a country’s future such as elections.

This is something that is not lost on Meta who is already gearing up for the upcoming 15th Malaysian General Election (GE15). During a recent briefing with media members, its Head of Politics and Government Outreach for APAC, Roy Tan insists it is part of Meta’s objective to ensure that it is harder for anyone to interfere with elections through the company’s platforms while continuing to allow their users have their voices heard.

Among the initiatives that Meta already planned for GE15 is the election day reminder on Facebook. In the days leading up to GE15, the company also intends to deploy notifications that would lead Facebook users to information from the Election Commission of Malaysia.

Instagram users will also be able to utilize election-related stickers very soon. That being said, its Head of Public Policy for Malaysia, Noudhy Valdryno said that the company is still finalizing the exact designs that these GE15-related deployments will be using.

To protect the integrity of Facebook and Instagram, security systems are already in place to help Meta block millions of attempts to create fake accounts. Alongside more than 40,000 people that are involved in the company’s safety and security efforts, these systems are also able to detect millions of fake accounts, with many being caught minutes after their creation.

Despite this, Roy said they are well aware that the appearance of harmful content may intensify during election season. Tapping into all the lessons that they have learned from recent elections throughout the world such as in the United States, Canada, Europe, India, and the Philippines, Meta will be on the look for content on Facebook and Instagram that may discourage the public from voting during GE15 or misdirect them by giving wrong information.

The company has also roped in more than 90 independent fact-checking organizations all over the world to further verify reported posts in more than 60 languages and for Malaysia, it has chosen to work with the renowned news agency Agence France-Presse (AFP). Once the content is rated as False, Altered, or Partly False, its reach and distribution within Facebook will be greatly reduced.

On Instagram, such content would be taken out of the Explore section and would be less prominent in Feed as well as Stories. There would be a label accompanying it too that includes a link that provides additional context from the fact-checker organization.

For WhatsApp, the company still relies on the message forwarding limit that it has put in place back in 2019. Under this policy, a forwarded message can only be pushed further to just five chats simultaneously while messages that have been forwarded more than five times can only be resent to just one other user.

Meta claimed that this policy managed to reduce the number of forwarded messages by more than 25%. As for frequently forwarded messages, there has also been a 70% reduction across the globe; hence, it is not surprising to see Meta continues to rely on the policy.

The policy also requires advertisers including those in Malaysia to go through an authorization process to make sure that their identity and location are real. These ads also carry a “Paid for by” disclaimer on them, so that Facebook users can easily identify them and the entity that was responsible for the ads.

Meanwhile, Meta Malaysia’s Noudhy said the company has also engaged directly with election authorities and stakeholders to inform them about all these safety, security and transparency efforts that Meta has embarked on so far.

These entities include government agencies, election watchdogs, non-governmental organisations and even political candidates. On the broader scale, there is also the We Think Digital program that has been around since 2020 in collaboration with Teach for Malaysia and Universiti Malaya to raise awareness of digital literacy and online safety among students.