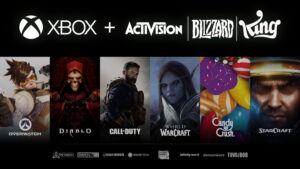 Microsoft has officially announced its plan to acquire Activision Blizzard through a deal that is valued at US$68.7 billion (~RM287 billion). The company pointed out that this deal will make Microsoft the third largest gaming company in the world after Tencent and Sony.

It goes without saying that having Activision Blizzard under its wing will boost Microsoft’s status in the gaming world who is already a huge name in the industry mainly through its Xbox effort. After all, Activision Blizzard is the home to many well-established franchises including Call of Duty, Overwatch, Warcraft, Diablo, Tony Hawk’s Pro Skater, and more.

The company also dabbles in the mobile and social gaming market through its subsidiary King who is the developer of the Candy Crush series. Another subsidiary, Major League Gaming which Activision Blizzard acquired in 2016, provides it with access to the esports world.

Microsoft expects that the acquisition will be completed within its fiscal year 2023 which will conclude in June 2023. Activision Blizzard’s existing CEO, Bobby Kotick will remain in the same role after the acquisition is completed and will report to the CEO of Microsoft Gaming, Phil Spencer.

It is not easy to overlook that this acquisition deal is taking place as Activision Blizzard is trying to fix its work environment after it was sued by the California Department of Fair Employment and Housing (DFEH) last year. The lawsuit took place after a two-year investigation by DFEH following reports of sexual harassment and gender discrimination.

Meanwhile, it was barely a year ago that Microsoft completed its acquisition of ZeniMax Media who is the parent company of Bethesda Softworks. Now, we can’t help but to wonder who will be the next game company on Microsoft’s target list.

The post Microsoft To Acquire Activision Blizzard Through A US$68.7 Billion Deal appeared first on Lowyat.NET.