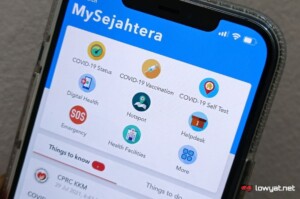 National contract tracing app MySejahtera, which was initially announced to be no longer mandatory as of 1 May, will be reactivated starting tomorrow. As revealed by Khairy Jamaluddin earlier today, the Ministry of Health (MOH) will once again rely on the app to monitor the potential spread of monkeypox, a disease that has reportedly recorded over 200 cases in 21 countries as of late.

While cases of this new outbreak have not been reported in Malaysia just yet, the MOH will be on high alert to ensure potential infections can be avoided or minimised. Khairy says Mysejahtera will receive an update tomorrow on 27 May 2022 to include new features, including an alert notification for travellers arriving in Malaysia from countries where monkeypox is endemic or has recorded cases.

Khairy adds that the alert will instruct these individuals to monitor themselves for 21 days, which is the expected incubation period for monkeypox, and to immediately seek medical attention if they develop symptoms. On that note, confirmed symptoms for the disease include fever, acute rashes, headache, swollen lymph nodes, muscle and body aches, back pain, and profound weakness. For further information, please refer to the World Health Organisation’s page regarding monkeypox via this link.

The minister further notes that MySejahtera will be used as a home assessment tool (HAT) for patients to update their health status, similar to how the app was utilised to monitor those who’ve tested positive for COVID-19. In addition, Khairy says MOH will also reactivate backward and forward contact tracing if there is a case or need to contain monkeypox in Malaysia.

MOH will expand its capacity and ability to screen for monkeypox using PCR and other molecular testing, the minister added. Meanwhile, federal guidelines have been issued to both public and private health facilities to manage monkeypox cases. When asked, Khairy says that there are currently no plans to conduct a mass immunisation for the disease, but existing vaccines will be distributed to those with close contacts and also health workers attending to affected patients.

The post MOH: MySejahtera To Be Utilised For Monkeypox Surveillance Starting Tomorrow appeared first on Lowyat.NET.