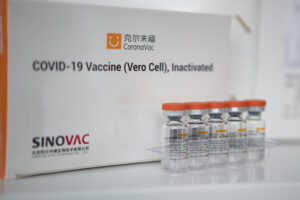 Deputy Health Minister Dr Noor Azmi Ghazali has reiterated that the government does not control the price of COVID-19 vaccines that are administered by private health facilities. This comes just after the deadline for the National Covid-19 Immunisation Programme for Children (PICKids) had passed, leading to children between the ages of five to 11 missing out on government-sponsored jabs if their parents neglected or refused to register them.

Noor Azmi said that the entire cost of vaccination will depend entirely on the private clinics and hospitals that offer the services, including the consultancy charges, consumables, and vaccine price. However, he noted that the price of the vaccine itself must follow the set ceiling price.

While the price for the Sinovac vaccine in the private market was capped at RM150 per dose last year, the government amended the ceiling retail price in January to RM77 per dose which has also been applied to the Sinopharm vaccine. Even though both shots are available at private health facilities, Sinovac is the only one of the two approved for use on children, while Pfizer is still unavailable for the private market.

The deputy minister previously said that the Ministry of Health (MoH) will not be extending PICKids, justifying that the government had given parents enough time to bring their children and get the free shots. However, those who had to defer their vaccination due to being infected by COVID-19 can walk in for the jab at health clinics after they recover up until 31 August.

Additionally, the free vaccines are still being offered to children who reach the age of five after the 31 May deadline, which will be open for registration until 31 January 2023. When PICKids ended, about 33% of children in the eligible age group had been fully vaccinated while almost half of them had received at least one dose.

As a whole, almost 83% of the entire Malaysian population has been fully vaccinated with close to the entire adult population being immunised. The country has since started transitioning to an endemic phase with several restrictions loosened and every economic sector reopened.

The post MoH Will Not Control Vaccine Price For Private Health Facilities appeared first on Lowyat.NET.