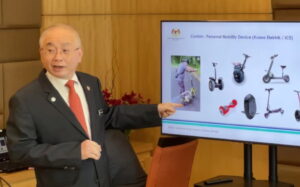 Transport Minister Ir. Dr Wee Ka Siong has released a statement to remind the public that certain micro-mobility vehicles are prohibited from being used on Malaysian roads. In fact, the minister pointed out that the ban has actually taken place since last year through the implementation of the Road Traffic (Prohibition of Use of Certain Micromobility Vehicles) Rules 2021 in mid-December.

Among such vehicles include Personal Mobility Devices (PMDs) such as scooters regardless of whether they are driven by an electric motor, internal combustion engine, or human power. In addition to that, mopeds and Personal Mobility Aids (PMAs) are banned as well.

Furthermore, the ban covers all parts of the road including pedestrian crossings. However, bicycles are not subjected to this law although electric pedal-assisted bicycles can only be used on the road if they fulfilled the Malaysian Standard MS2514 Specification and they also must have permanent pedals and throttle-less.

Ka Siong said that the usage of micro-mobility vehicles on the road has been deemed dangerous to both the riders and other road users which is why they have been banned by the government. On the other hand, the minister also pointed out that local authorities (PBTs) may consider setting up specific infrastructure that supports these micro-mobility vehicles.

This way, not only that PBTs could help promote safe usage of micro-mobility vehicles but also avoid them from getting mixed with the existing traffic flow. After all, the Road Transport Department and the police will now begin to enforce the ban immediately.

The post MOT: Electric Scooters and Other PMDs Are Already Banned From The Road Since Late 2021 appeared first on Lowyat.NET.