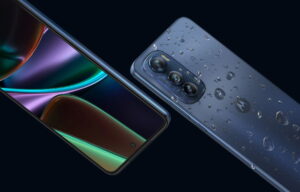 Launched late last month, Motorola dubbed it the thinnest 5G phone in the market due to its 6.79mm profile. It is unclear whether that is a real record or an overblown claim made from Lenovo’s subsidiary but nevertheless, the new Motorola Edge 30 is now available for pre-order in Malaysia.

Aside from that, the Edge 30 is essentially a mid-range 5G phone running on a Qualcomm Snapdragon 778+ processor alongside 8GB of RAM and 128GB of internal storage. The IP52-rated phone also comes standard with a 6.5-inch Full HD+ AMOLED display that has a refresh rate rating of 144Hz, an in-display fingerprint reader, and supports HDR10+ contents.

Photography-wise, the Edge 30 relies on a 50MP main camera alongside a 50MP ultra-wide camera that also acts as a macro camera. A 2MP depth camera completes the phone’s rear camera module while there is also a 32MP selfie camera on the centre top part of its display.

Equipped with stereo speakers that support Dolby Atmos, the Edge 30 also features a 4020mAh battery that apparently able to deliver more than 30 hours of battery life. A TurboPower 33W charger also comes as a standard with the phone.

Despite being part of Lenovo, Motorola smartphone rollout into Malaysia usually takes place in a low-key manner which is why we only caught wind of the Edge 30 5G’s pre-order today, right at the tail-end of its pre-order promotion period. While we hope that Lenovo would consider extending the pre-order promotion, do head on to Lenovo’s official stores in Lazada and Shopee if you want to get your hands on the new 5G for RM1,399 instead of its usual RM1,599 price tag.

Meanwhile, Edge 30 has yet to appear on the DNB 5G device list at the time this article is published. This means that the phone is not compatible with Malaysia’s 5G network just yet. That being said, this also applies to the older Motorola 5G phones such as Edge 20 Pro, Edge 30 Pro, and G51 as well although they have been included in the Upcoming Devices list on DNB’s website.

The post Motorola Edge 30 Now Available In Malaysia For As Low As RM1,399 appeared first on Lowyat.NET.