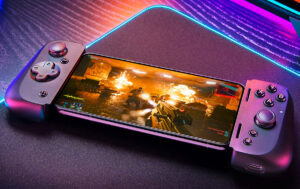 Razer has unveiled its new Kishi V2, which is the successor to its smartphone gaming grip that was released in 2020. As you may expect, the second generation controller is packed with several improvements over its predecessor, such as a wider range of compatibility with both current and upcoming Android smartphones, new buttons, and upgraded switches for better responsiveness.

Visually, the Razer Kishi V2 looks almost no different to its predecessor, also presented in a matte black colour scheme – something that is typical for most products that are offered by the gaming firm. However, there are some notable changes from the original, including re-labeled interface buttons, a newly added Share button on its right side, and two macro buttons situated beside each shoulder trigger.

Additionally, the gaming grip’s bridge has also been simplified to provide a stable feel and universal smartphone compatibility – also losing the ability to collapse into a compact gamepad-like size when not in use. Razer says the Kishi V2 will work with current and upcoming Samsung, Google Pixel and other Android-powered phones that are coming to the market this year. And like the original, no fancy Chroma lighting system has been added to the device, which is not necessarily a bad thing.

Hardware-wise, newly included are microswitches for the accessory’s buttons, the same ones used on the company’s Wolverine V2 controller for consoles. This replaces the predecessor’s membrane-based buttons for a tactile experience and improved responsiveness, promising optimised performance while playing both mobile and streamed games on handsets. Unchanged from the original is the low latency connectivity via USB-C, and a pass-through charging port for charging smartphones that are connected to the gaming grip.

According to Razer Malaysia, the Kishi V2 is now available via the Razer webstore and will soon be added to its official stores on Lazada and Shopee. In terms of pricing, the newly introduced gaming grip for Android smartphones is retailing at RM 489. The company has yet to confirm whether an iPhone variant is in the works, let alone slated for release in the near future.