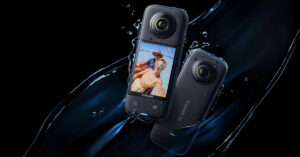 Just recently made its debut is the all-new Insta360 X3 360-degree camera, which arrives almost two years after the launch of its predecessor. Seemingly taking a page from DJI, its closest rival, the company has also decided to simplify its product name by dropping the “One” from the series’ branding.

As expected, the successor to Insta360’s all-in-one 360-degree action camera features several improvements in terms of hardware and features. Chief amongst which is the larger 2.29-inch rectangular touchscreen in front of the device, which replaces the One X2’s arguably smaller circular display. Additionally, the company says the screen features tempered glass protection, while the device itself is waterproof down to 33 feet. There’s also four new physical buttons on the device for better control, especially when wearing gloves.

Though it features a similar imaging system as the older model, the newer X3’s 1/2-inch 48 MP sensors now come with improved lenses that feature an aperture of f/1.9 and a wider focal length of 6.7 mm. According to Insta360, the action camera itself is capable of recording 360-degree footage of up to 5.7K resolution at 30 frames per second (fps), single lens videos at 4K 30 fps, 360-degree stills at 72 MP and regular photos at 18 MP.

Features-wise, it comes with the company’s Active HDR mode, Timelapse, TimeShift, and the Matrix-inspired 360-degree Bullet Time mode. Newly introduced is Me Mode, where the camera creates a 180-degree video with the user framed in the centre and the selfie stick is digitally removed from the scene. Then there’s also the new Loop Recording mode which records continuously but only saving footage permanently when the user wishes. However, Insta360 notes that the latter will only be available via a future update.

In terms of battery, the new X3 comes with a bigger 1,800mAh removable battery, which allows it to have a total runtime of 81 minutes. It’s also worth noting that the newer 360-degree action camera is not compatible with its predecessor’s batteries, so you’ll need to own compatible ones if you wish to swap them out for extended periods of video recording.

According to Insta360 Malaysia, the new X3 action camera is available for RM 2,199. The device is available now and can be ordered via the brand’s local online store, as well as its official stores on Lazada and Shopee.