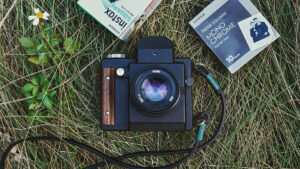 NONS, a Hong Kong-based company that introduced the unique SL42 camera in 2020, is back with a new interchangeable lens SLR shooter that instantly prints to Instax film. Unlike the prior model which is designed to be compatible with M42 lenses, the newly unveiled NONS SL660 accepts those from the Canon EF line.

According to the product’s Kickstarter page, the camera features a compact vintage-inspired SLR design with an aluminium body, stainless steel parts, and wood handgrip. Also onboard is a pentaprism-based viewfinder to aid with your framing, a hot shoe for external flash mounts, as well as various manual controls for shutter speeds, aperture, and exposure.

NONS notes that its built-in EF lens mount also provides photographers the ability to use other non-Canon lenses such as Nikon F, M42, and so on through compatible adapters. On that note, the camera will ship out together with a first-party 50mm f/1.8 lens to help you start out.

Like the SL42 model, the NONS SL660 only supports manual focus and is compatible with Fujifilm’s Instax Square 1:1 prints. A much welcomed modern integration is the ability to charge the camera’s onboard battery via USB-C, which the company claims is able to last up to 100 shots.

Its design is not the only vintage-inspired element on the camera. NONS says in order to snap a photo with the SL660, the user must first wind the shutter, choose a speed, check the light meter and adjust the aperture accordingly, focus, press the shutter, and then eject the film. All of these are done manually, so if you’re hoping for a more simplified and quicker photography experience, you may want to consider a different camera.

Again, like the SL42 before this, the company is currently seeking crowdfunding support through Kickstarter for the development of its new camera. NONS is accepting fundings as low as HK$ 10 (~RM 5.36) for the project, but only those who have pledged HK$ 3,939 (~RM 2,112) or more are entitled to receive a unit once the campaign ends.