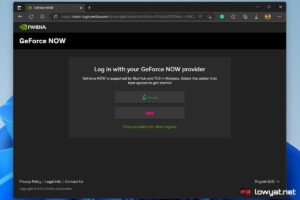 Through the power of cloud gaming, NVIDIA GeForce Now provides a way for gamers to play games without the need to have a powerful graphics card on their machine. In general, the service is available in Malaysia although it is being hosted and operated by Singaporean telco, StarHub down south.

However, it seemed that NVIDIA may have finally roped in a Malaysian company as its GeForce Now Alliance partner. Twitter user @subversivepop has pointed out that the Yes telco which belonged to YTL Communications, was listed alongside StarHub as a GeForce Now partner on the service’s login page.

We have since verified this ourselves but similar to @subversivepop’s experience, we have encountered this error when we click on Yes logo:

We have tried this not only on the Edge web browser on our PC but also on the dedicated GeForce Now Android app. While it is rather intriguing to see Yes name on the login page, it did not really surprise us though as YTL Comms previously has indeed expressed its interest in cloud gaming.

During the Digital Nasional Berhad’s 5G launch event on 15 December which also includes the official launch of Yes 5G service, one of the demos that YTL Comms has set up at its booth is cloud gaming. However, the demo utilized the Chikii Cloud Gaming app instead of GeForce Now.

Furthermore, YTL itself is in the data centre business and maintains such a facility alongside the Yes network operation centre in Sentul. The company also has another data centre in Singapore and is currently building its third facility in Johor which is expected to be ready in 2024.

Since there is no official announcement from either YTL Comms or NVIDIA regarding this so far, we are now reaching out to both companies for further clarification. We will keep you updated once we received more information.