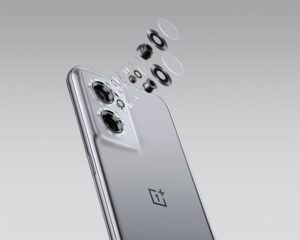 OnePlus Malaysia has released a teaser on its Facebook page, revealing the imminent arrival of its second generation mid-range 5G smartphone, the Nord CE 2 5G. As you may recall, the handset was just recently launched internationally last week and is introduced to feature upgraded hardware, as well as a new yet familiar design for its rear plate.

Just to bring you up to speed, the OnePlus Nord CE 2 5G is equipped with a 6.43-inch HD AMOLED display with 20:9 aspect ratio, HDR10+ support, 90Hz refresh rate, and Gorilla Glass 5 protection. Also featured is an in-display fingerprint scanner, Bluetooth and NFC support, Wi-Fi 6 connectivity, and a 3.5mm headphone jack. In terms of colour selection, the phone is offered in either Gray Mirror or Bahama Blue.

Under its hood is a 5G-enabled MediaTek Dimensity 900 chipset, as opposed to its predecessor which came with a Snapdragon processor. Paired together with the SoC is up to 8GB of RAM and 128GB of storage, which can be expanded up to 1TB via microSD. Powering the phone is a 4,500mAh battery with 65W SuperVOOC charging capability.

Featured on the back of the Nord CE 2 5G is a triple camera array which consists of a 65MP primary sensor, 8MP ultra-wide, and a 2MP macro lens. Meanwhile, situated in the punch-hole cutout on its display is a 16MP selfie camera.

OnePlus Malaysia has yet to confirm the local launch date for the new smartphone, while the same can be said for its expected availability and pricing. For reference, the Nord CE 2 5G currently retails at INR 23,999 (~RM1,300) in India.