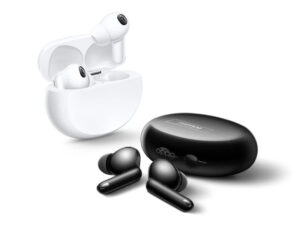 OPPO has officially launched the Enco X2 wireless earbuds alongside its new Find X5 Pro flagship and its first Android tablet, the OPPO Pad. They are the follow-up to last year’s Enco X but come with some significant upgrades.

The most obvious improvement would be the battery life, which jumps from the previous generation’s 25 hours with Active Noise Cancellation (ANC) turned off to a total of 40 hours with the Enco X2. On a single charge, they can last 5.5 hours with ANC on or 9.5 hours with ANC disabled. Five minutes of charging can provide two hours of listening time and the charging case supports wireless charging.

The earphones are equipped with 11mm adaptive drivers and quad-magnetic planar drivers, which claims to give it better highs and lows. Low Latency High-Definition Audio Codec (LHDC) 4.0 is supported, but using it will significantly cut the total battery life down to just 27 hours.

The X2s are IP54 water and dust resistant, sport Bluetooth 5.2, come with anti-earwax ear tips, and are also the first earbuds to feature Dolby binaural recording. Instead of tapping the controls like with the original Enco X, the new version is triggered by squeezing the stems like the AirPods Pro, as well as sliding up and down to adjust the volume.

The OPPO Enco X2 come in black and white colourways and will be available in Europe in mid-April for EUR199 (~RM936). The company has not announced pricing or availability for Malaysia at this time.