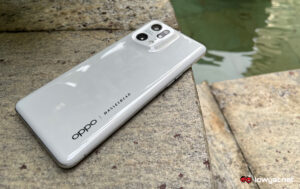 OPPO has officially launched the Find X5 Pro flagship in Malaysia. Along with it are numerous hardware upgrades such as the inclusion of Qualcomm’s latest high-end processor, better battery life, and so on. But surely, that can’t be all, right?

If there’s one thing that I’ve always looked forward to from the Find X series over its competitors, it’s the new innovation that OPPO is known to introduce on its flagship smartphone line. For instance; the first model featured a motorised pop-up camera module, while its successor highlights the company’s impressive optical and hybrid telephoto camera abilities, and last year’s Find X3 Pro came with a cool but gimmicky microscope camera.

Which now brings us to the fourth generation flagship (which is named the X5 because of reasons we’re all familiar with). But instead of introducing something out of the ordinary, the company had decided to flex the hardware and AI capabilities of its first-party MariSilicon X imaging neural processing unit (NPU). So yes, it appears that OPPO is playing it safe yet again with this year’s release – much like the Find X2 series from two years prior.

Nevertheless, the lack of something unique on this year’s model shouldn’t necessarily considered as a determining factor. As mentioned earlier, the OPPO Find X5 Pro still features a significant array of hardware improvements that makes it a solid contender in the flagship smartphone segment.

So, without further ado, let’s get to the nitty gritty.

Just in case you missed our earlier reports, here’s a recap of the Find X5 Pro’s specifications, which OPPO has retained from the global release for the Malaysian market. Found onboard the device is the same 6.7-inch curved AMOLED display, Snapdragon 8 Gen 1 chipset, 12GB RAM, 256GB internal storage, 5,000mAh battery with 80W wired and 50W wireless fast charging support, Android 12 via ColorOS 12.1, as well as an imaging system consisting of a 50MP primary camera, 50MP ultra-wide, 13MP telephoto, and a 32MP selfie camera.

If you fancied last year’s Find X’s design, then you’ll be glad to know that the newer Find X5 Pro inherits this design language. Unchanged is the seamlessly integrated rear camera to its rear case, but now with a trapezium-like shape. The bump itself only protrudes slightly from the phone’s body, granting the phone a very slim side profile.

Like its predecessor, the sleek sports car-esque design highly complements the phone’s curved display. As you can see from the images included in this review, the colourway for the OPPO Find X5 Pro that was passed to us is the Ceramic White option which, without a doubt, grants the phone a very premium look and feel. Alternatively, OPPO is also offering its current generation flagship in Glaze Black, which is pretty much the same but, obviously, in a different colour.

While I really like its design, I personally find that the Find X5 Pro can be a bit slippery when casually held with one hand. This is an expensive device after all and even with Corning Gorilla Glass Victus protection, you wouldn’t want it to slip from your hands and witness the effects of Newton’s laws. Therefore, if you are planning to own the phone, I highly recommend that you also use it along with the silicone case included in the box.

That aside, the phone is actually pretty comfortable to hold and use. In regards to the latter, its physical button layouts are pretty standard and familiar, where the volume rockers are situated on the left and the lock/power button is on the right. And just in case you’re wondering, the OPPO Find X5 has a dust/water resistance rating of IP68.

You could also bump the resolution up higher to WQHD+ (3216 x 1440) via settings if you wish, though doing so will consume more power. Naturally, lowering down the Find X5 Pro’s refresh rate would also grant for longer battery life. Personally, I’d stick with the default settings, as I find it to be sufficient for handling my everyday media consumption.

As for the phone’s interface, OPPO’s Android 12-powered ColorOS UI definitely does its job well of helping you navigate around, while also providing you with flashy animations when you charge the phone or unlocking it via fingerprint. Speaking of which, I’m pleased to find that the under-display fingerprint sensor on the Find X5 Pro is very fast – granting me quick access to the device. Of course, there are other biometric approaches as well, such as Face Unlock, if you fancy alternative or additional safety measures.

Performance-wise, the onboard Snapdragon 8 Gen 1 chipset and memory configuration are superb – as expected from a flagship-tier smartphone. Needless to say, the Find X5 pro is more than capable of flawlessly handling tasks such as multi-app switching, heavy photo and video editing, as well as high resolution video recordings.

For gaming, the phone holds up very well running graphics intensive and demanding titles, resulting in decently fast loading times and high frame rates. Genshin Impact, my usual go-to for benchmarking smartphone hardware, runs well on the Find X5 Pro at the highest setting and with the fps set to 60. I should also point out there are times that I notice a dip in frames when there’s plenty of effects and characters happening on-screen. However, this may be caused by the game’s own optimisation issues rather than the phone’s hardware.

The Find X5 Pro high performance also leads to a common issue: high heat generation. This is very apparent when I was running various benchmark software as well as Genshin Impact. Though not scorching hot, the heat generated was enough to feel uncomfortable when gaming for long periods of time.

Last but not least is the phone’s battery. For this, I can safely say that its usage life is one of the best out there. Using our usual video streaming test approach, the Find X5 Pro went on for almost 12 hours straight with 20% of battery to spare. Keep in mind that our test requires the phone to play continuous streaming videos at full resolution and screen brightness, but at a low volume.

With this, you can be certain that the Find X5 Pro could go on even longer when used typically. And as advertised, charging the phone with its included 80W charger will have it back up from flat to 100% in less than an hour.

The imaging setup on the OPPO Find X5 Pro is definitely no slouch, packing dual Sony IMX766 50MP sensors on its primary and ultra-wide cameras, as well as a 13MP Samsung telephoto lens. Both of which are more than capable of capturing richly detailed high resolution photos in both well lit and lowlight environments. This is further complemented by the MariSilicon X’s AI capabilities which automatically enhances an image’s vibrancy, exposure and so on to produce very professional-esque results almost instantly.

However, expect to still see the usual flaws such as artefacts, muddiness, and noise and to present themselves when shooting in lowlight, especially in near pitch black darkness. Despite this, the amount of details and colours preserved when snapping photos in the dark are actually downright impressive. So much so that the photos produced look as though they were shot under adequate lighting.

Though Find X5 Pro’s camera system mostly sounds good so far, I do have my gripes. Firstly, its excellent OIS feature is not present on its telephoto shooter, which instead relies on digital stabilisation. This still provides a bit of a challenge for those who wish to capture photos of distant objects, as you always have to make sure that the subject stays in frame. Additionally, the telephoto’s zooming capability also feels very limited, as it only allows for 2x optical zoom while the rest are done digitally.

Seeing that this model ditches its predecessor’s microscope camera, I was really hoping that OPPO would compensate for this by bringing back the Find X2 Pro’s 5x optical OIS telephoto. But alas, instead we have the MariSilicon X as one of the new flagship’s main highlights. Sure, the enhanced picture quality produced by the NPU and its AI system are remarkable, but I personally feel that the Find X5 Pro is lacking a real standout feature to make it stand out from its competitors.

So where’s the Hasselblad-made goodies on the Find X5 Pro? Well, most of the company’s involvement is mainly present in the phone’s camera software, which automatically tunes the colours of images and videos based on Hasselblad’s standards. OPPO also made its camera app’s shutter button to appear in orange, which is also a nice nod to the Swedish camera manufacturer. And besides that, there’s a Hasselblad XPAN mode that allows you take photos in a wider aspect ratio, complete with a film-like grainy filter and appearance. This is more of a novelty feature than anything and despite being a panorama mode, it utilises the phone’s primary lens rather than the ultra-wide.

Since OPPO’s current-gen flagship comes with the Snapdragon 8 Gen 1, it’s only natural that we point out similarly equipped devices for comparison. For this review, we’ve listed two of its closest rivals from Samsung and Xiaomi, which are already available in Malaysia.

Samsung is definitely the brand to beat for every other Android-based smartphone maker in the market. This year, the South Korean tech giant presents the Galaxy S22 Ultra as its top-of-the-line flagship, which features a curved 6.8-inch display with 3088 x 1440 pixel resolution and 120Hz refresh rate, Snapdragon 8 Gen 1 chipset, up to 12GB of RAM and 512GB internal storage, as well as 5,000mAh battery with 45W fast charging.

Also onboard is an imaging setup which consists of a 108MP primary camera, 10MP periscope telephoto, 10MP standard telephoto, 12MP ultra-wide, and a 40MP selfie camera on the phone’s display. The Samsung Galaxy S22 Ultra starts at RM 5,099 and maxes out at RM 5,899 for the highest available spec.

The Xiaomi 12 Pro is one of the first smartphones to feature the Snapdragon 8 Gen 1 chipset in the market, so it’s obvious that we’ve decided to add it to this list. Besides that, it also comes with 12GB RAM, 256GB internal storage, and a 4,600mAh battery with 120W fast charging support.

Imaging-wise, Xiaomi’s current-gen flagship comes with triple 50MP sensors for its primary, ultra-wide and telephoto cameras, while featured in front is a 32MP selfie camera. As for pricing, the Xiaomi 12 Pro arrives in a single configuration which is sold locally at RM 3,899.

Priced at RM 4,999, the OPPO Find X5 Pro is going to be a tough one to recommend seeing that some of its competitors are available at lower price points. Featuring a unique selling point would often justify smartphones with high prices, but as I pointed out earlier, OPPO’s current-gen flagship is clearly missing something truly unique that could set it apart from the rest.

Nevertheless, the OPPO Find X5 Pro is still a solid allrounder that does not disappoint in terms of performance and imaging. For those looking for a flagship-tier upgrade, this device is definitely one of the worthwhile choices for you to consider. Especially if you’re in the market for a premium smartphone that certainly looks the part.