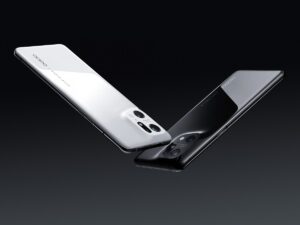 OPPO today has officially unveiled the Find X5 series, its latest flagship smartphones which consists of a standard model and a high-end Pro variant. The duo is the first from the brand to feature an camera system powered by its first-party MariSilicon X neural processing unit (NPU), as well as imaging enhancements by Swedish camera manufacturer Hasselblad.

The OPPO Find X5 Pro sports a 6.7-inch curved 10-bit AMOLED display with WQHD+ resolution, 100% P3 colour gamut coverage, and 120Hz refresh rate. On the back of the phone is a ceramic panel that is claimed to be two times stronger than any conventional glass, and is effective for heat dissipation as well. Additionally, the new smartphone is splash, water, and dust resistant with a rating of IP68.

Much like its predecessor from last year, the Pro also comes with a seamless camera bump for its rear imaging system, but now featuring an all-new design. As for colour options, the high-end flagship is offered in Ceramic White and Glaze Black.

OPPO refers to the Find X5 Pro as its most powerful flagship smartphone to date, thanks to its onboard Snapdragon 8 Gen 1 chipset and the aforementioned MariSilicon X NPU. The latter not only contributes to the phone’s AI computing capabilities, but also enables its imaging system to run the brand’s advanced AI noise reduction (AINR) algorithm that provides four times image improvement during low-light photography and video recording.

Meanwhile, its powerful SoC is accompanied with 12GB of RAM and 512GB of UFS 3.1 internal storage. Powering the Find X5 Pro is a dual-cell 5,000mAh battery with 80W SUPERVOOC fast charging support via USB-C, which OPPO claims is able to top-up around 50% of its capacity in just 12 minutes. Additionally, the phone also comes with 50W AIRVOOC wireless charging that is claimed to be able to charge its battery to 100% in only 47 minutes.

Complementing the Find X5 Pro’s powerful NPU is a triple camera setup on its back, which consists of dual Sony IMX766 sensors (again, like its predecessor) for its wide and ultra-wide shooters, accompanied by a 13MP telephoto camera. Housed within the display’s punch-hole cutout, on the other hand, is a 50MP Sony IMX709 selfie camera.

It’s also worth noting that the imaging system also comes with a five-axis optical image stabilisation (OIS) system to help reduce shakes and bumps when photo taking and video recording. Besides that, found in the phone’s Pro Mode is Hasselblad Natural Colour Calibration tool which offers a range of Master filters that enhances the look and feel of your photos and videos.

Next up is the standard variant of the OPPO Find X5, which differs from the Pro in terms of size, design, and some internal hardware. The phone comes with the same display technology as its sibling, but with a smaller 6.5-inch curved screen. Additionally, its rear camera bump features the same shape as the Pro’s, but is presented as a glass covered island instead of a seamless design. For its colourways, the vanilla model is offered in either Black or White options.

Image: OPPOUnder the hood, the OPPO Find X5 is equipped with the same MariSilicon X NPU, but features a Snapdragon 888 chipset instead. Along with it are 8GB of RAM and 256GB of UFS 3.1 internal storage. It also comes with a smaller battery capacity at only 4,800mAh but packs the same 80W SUPERVOOC fast-charging capability via USB-C. However, its wireless charging is capped at only 30W.

Imaging-wise, the standard model comes with the same triple camera setup and selfie shooter as the Pro model. Similarly, it also features the Hasselblad tool and MariSilicon-based imaging enhancement capabilities.

Both models of the OPPO Find X5 series are slated to ship out in certain markets on 14 March, with pre-orders open starting today. The standard variant is priced at EUR 999 (~RM 4,694), while the Pro model is retailing at EUR 1,299 (~RM 6,103), which are noticeably more pricier than their predecessor. OPPO Malaysia has yet to confirm the duo’s local availability and pricing at this time.