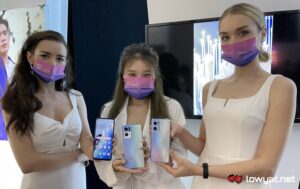 While it may take the company almost four months to bring the series over here but nevertheless, the OPPO Reno7 Series has finally made its debut in Malaysia. Available for pre-order starting from today until 4 March, both the standard and Pro variants can be obtained in our market.

You may have checked out our first hands-on experience with the Reno7 Pro right here but as a quick catch-up with those who are not familiar with OPPO’s new phone, the Pro model is equipped with a 6.5-inch Full HD+ 90HZ AMOLED screen. Running on MediaTek Dimensity 1200-Max processor, one of the phone’s main highlights is the 50MP IMX766 sensor in its main camera which was apparently developed together by Sony and OPPO.

Alongside the main camera are an 8MP ultra-wide camera, 2MP macro camera, and dedicated colour temperature sensor. Sony is also responsible for the sensor on Reno7 Pro’s selfie camera which comes in the form of the 32MP IMX709.

The Reno7 Pro also comes with a pair of batteries that provide the phone with a total battery capacity of 4500mAh. Using a 65W SuperVOOC charger, OPPO claimed that the phone can regain back 100% of its capacity within 31 minutes.

Unlike the version that was launched in China back in November, the standard Reno7 in Malaysia is more akin to the Reno7 SE over there. For example, the Malaysian version comes with curved edges as opposed to the flat body on the Chinese model.

Another indication that China’s Reno7 SE was turned into a standard Reno7 model for the Malaysian market is the fact that it comes with MediaTek Dimensity 900 chip instead of Qualcomm Snapdragon 778G. That being said, OPPO somehow retained the rear camera module from the Chinese market which features a 64MP main camera as well as 8MP ultra-wide and 2MP macro cameras, for our market.

Similarly, it also still features a 32MP selfie camera although OPPO didn’t reveal the manufacturer of the camera sensors that it has equipped into the Malaysian variant. Not to forget, the phone also still comes with a 6.4-inch Full HD+ 90Hz AMOLED display and 4500mAh battery although the variant for our market can support a SuperVOOC charger with a much higher power rating at 65W just like the Pro model.

Early adopters of the Reno7 Series devices will be provided with Enco Buds, Reno Bag, and 1-year protection against screen damage while they will also be entitled to additional rewards through the My OPPO app. Additionally, they can also enjoy a 50% discount on the equally new OPPO Watch Free and Enco Air2.

Furthermore, the first 100 customers that choose to pick up their new Reno7 devices at OPPO’s roadshow at Sunway Pyramid on 5 and 6 March will receive the OPPO Watch Free without any costs. Similar privilege is also applicable for the first 30 self-pickup customers at other Reno7 roadshows throughout the country.

As mentioned earlier, the Reno7 Series is now readily available for pre-order from today until 4 March and customers can do so through OPPO Malaysia’s direct online store as well as its Lazada and Shopee stores. Alternatively, both devices are also available for pre-order at OPPO Brand Stores, My OPPO Space, telco partners, and authorised retailers throughout the country.