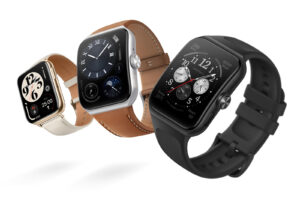 On the same day that Samsung launched the Galaxy Watch5 and Watch5 Pro, OPPO launched its own Watch 3 series. While there is no rugged outdoors variant, the Watch 3 and Watch 3 Pro are equipped with some powerful specs at competing price points.

Both watches are the first to be powered by the all-new Qualcomm Snapdragon W5 Gen 1 chipset, as well as the Apollo4 Plus co-processor jointly developed by OPPO and Ambiq. They also come with 1GB of RAM and 32GB of storage, with support for eSIM, Bluetooth 5.0, and NFC.

The Watch 3 sports a 1.75-inch AMOLED display while the Pro model gets a bigger and curved 1.95-inch LTPO AMOLED display. Both are protected by 3D glass covers but only the Pro features a dial on the side. They run on ColorOS in China but the global variants are expected to be shipped with WearOS as we’ve seen in the past, though it’s unclear which version exactly will be used.

Of course, the smartwatches are also equipped with various sensors for health and workout tracking purposes. Both have an optical heart rate sensor, blood oxygen sensor, sleep tracking, and built-in GPS, with an additional ECG sensor exclusive to the Pro variant. The watches are also rated with 5ATM water resistance, making them safe to wear while swimming.

The Watch 3 has a 400mAh battery while the Pro version’s capacity is 550mAh, giving them four-day and five-day battery lives respectively with typical usage. OPPO also claims that just 10 minutes of charging will give the devices a “full-day” battery life which takes about 60 minutes to fully charge.

The OPPO Watch 3 comes in black and gold whereas the Watch 3 Pro has black and silver options. As for the pricing, the standard model starts at CNY1,599 (~RM1055) while the higher-end Pro model comes in at a starting price of CNY1,999 (~RM1,320)