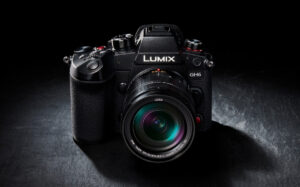 Panasonic today has launched the Lumix GH6 camera for the global market. While it is the second Micro Four Thirds camera released this year after the OM System OM-1, this new shooter currently holds the largest megapixel count in its class.

To be specific, the Panasonic Lumix GH6 is equipped with a 25.2MP sensor with a high-speed readout via the new Venus Engine image processor. These enable the camera to snap photos at 14 frames per second (fps) with autofocus locked. Also onboard is an all-new five-axis image stabilisation system with 7.5 stops of shake reduction, contrast detect autofocus system, and face/eye/head/body/animal AI-enhanced recognition.

For videos, it is capable of shooting up to 10-bit 4:2:0 4K at 120fps, 10-bit 4:2:2 4K at 60fps, and 10-bit 5.7K at 60fps. All three modes utilise the camera’s full sensor width with super-sampled video, except for 4K 120p setting which uses pixel binning. In addition, the Lumix GH6 is also the first Panasonic Micro Four Thirds camera to include HDMI 2.1 output, as well as V-Log format and V-Gamut colour space which preserves more dynamic range for post-production. The company notes that a future firmware update for the camera will add the ability for it to record ProRes RAW videos to an external Atomos recorder.

In terms of design, the Lumix GH6 features an almost similar design to its predecessor, complete with the same 3-inch 1.8M dot tilt-swivel rear display and a 3.68M dot OLED electronic viewfinder. Similarly, the camera supports the same removable BLK-22 battery, which is also used by last year’s GH5 Mark II. What’s new on the latest model is the addition of a built-in active cooling fan, which allows it to record high resolution videos for long periods of time. Besides that, the camera also features a double memory card slot for a CFexpress Card (CFexpress Type B) and SD Memory Card (UHS-I/UHS-II UHS Speed Class 3, UHS-II Video Speed Class 90), as well as support for Wi-Fi and Bluetooth 5.0 connectivity.

The new Panasonic Lumix GH6 is slated to ship out in certain regions next month and is priced at US$ 2,199 (~RM 9,206) body only. Its availability in Malaysia has not been confirmed at this time.