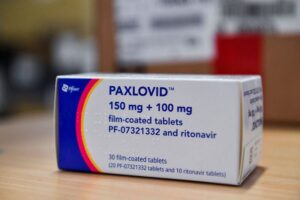 Last month, Health Minister Khairy Jamaluddin said that as of 9 May, the Paxlovid antiviral drug has helped 179 COVID-19 patients fully recover. No side effects were recorded by the patients either. Following this success, the minister says that the drug will soon be made available at private hospitals.

According to FMT, the minister also said that as of 5 June, he number of COVID-19 patients that have recovered following the Paxlovid treatment has gone up to 1364. As before, no side effects were detected among said patients. And given the antiviral drug’s effectiveness in reducing the effects of infection, and by extension the mortality rate, the Ministry of Health is expanding the availability of the drug to patients in private hospitals.

He also adds that the prescription of the Paxlovid antiviral drug is free even in said hospitals. That being said, the usual consultation fees and other charges still apply.

On a related note, the health minister also says that the ministry will start administering Evusheld soon. It will be provided in government hospitals as pre-exposure prophylaxis (PrEP) for individuals who are not yet infected, but face high risks of infection.

Unlike the Pfizer-made antiviral drug Paxlovid which is meant to treat COVID-19 infections, the Evusheld drug made by AstraZeneca is meant to prevent infection. Specifically, it’s made for vaccinated but immunocompromised individuals, as well as those who cannot take the vaccine in the first place. Said individuals must also be 12 years of age or older, weighing 40kg or more. Though the drug has to be administered at least two weeks after vaccination, be it after being partially or fully vaccinated.

Evusheld is capable of providing protection to recipients for up to six months after inoculation. This includes the Omicron sub-variants of the virus. Prescription is done via two different drugs, Txagevimab and Cilgavimab, which are to be administered consecutively.

The post Paxlovid To Be Made Available At Private Hospitals Soon appeared first on Lowyat.NET.