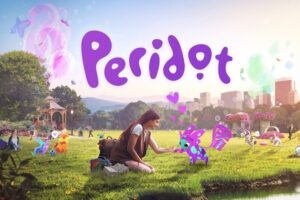 Niantic, the developer of the Pokemon Go AR game, has announced another AR mobile title. It’s called Peridot, a virtual pet-esque game with, you guessed it, AR elements.

According to The Verge, Peridot has quite the backstory to it: “After thousands of years of slumber, Peridots are waking to a world vastly different from the one in which they used to roam, and they’ll need your help to protect them from extinction”. Despite the grim-sounding premise, gameplay is mostly what you’d expect from a virtual pet-style game, like the Tamagotchi. This means feeding, training, and playing with these creatures as they grow from their juvenile to adult stages.

There’a also a breeding mechanic, which is where the AR elements come in. To have another Peridot breed with the one in your care, you’ll have to look for them in the wild. This, of course, requires you to go outside, much like Pokemon Go. Niantic claims that every creature is unique, created through a combination of hand-crafted assets and procedural generation. There are different creature archetypes, but you can breed creatures of different archetypes to create unique combinations of the two.

Despite the unnecessarily grim and vulnerable setting, Peridots don’t actually die. So if you quit the game and return after some time, you’ll still see your virtual pets hanging around, rather than just a pile of bones. And when you are playing, these virtual pets can recognise different real-world surfaces like dirt, sand, water, grass and foliage, thanks to Niantic’s Lightship platform.

Peridot is Niantic’s first original IP since Ingress. So it makes a certain amount of sense that it looks to have so many new features that can be seen as improvements to its existing portfolio of mobile AR games. That being said, these should probably be better off integrated into the already successful Pokemon Go. After all, a new game means another risk reminiscent of Harry Potter: Wizards Unite.

At any rate, Peridot will be rolling out in “select markets” this month for Android and iOS. Additional markets will be added “as testing and iteration during soft launch continues”, which sounds like a very gradual process. And despite the unique possibilities of each virtual pet, Niantic senior product manager Ziah Fogel says that they are not NFTs.

The post Peridot Is A New AR Virtual Pet Game By Niantic appeared first on Lowyat.NET.