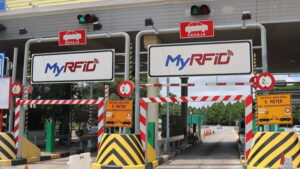 Even though it has almost been five years since the RFID toll payment was introduced to the public, complaints regarding the system still lingered around, especially regarding its efficiency. Many have also pointed out that the low amount of RFID lanes has also contributed to the congestion at toll plazas, according to the Minister of Works, Alexander Nanta Linggi.

As a result of a meeting between the Ministry of Works, Malaysian Highway Authority (LLM), PLUS Malaysia, and Touch ‘n Go (TNG), new RFID lanes will be added to several toll plazas that are under PLUS management. Specifically, the implementation will take place at 11 toll plazas across Peninsular Malaysia.

Here are their locations:

PLUS has been utilizing the RFID toll payment system which is provided by TNG and works hand in hand with the TNG eWallet app since 2020. That being said, the company only went all-in with the payment method on 15 January 2022.

However, the RFID’s reputation was marred after the system was deemed as the main recent behind massive congestion throughout PLUS highways on the morning of 17 January. A few days later, PLUS began to reinstate SmartTAG lanes at several key toll plazas to mitigate the traffic congestion caused by RFID.

Hence, it is interesting to see that all the parties involved have decided to increase the number of RFID lanes once again. So, let’s see whether the move could help improve the RFID reputation among consumers or make things worse.