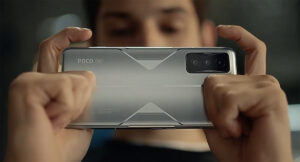 POCO has officially launched the POCO F4 GT in Malaysia. It is the brand’s latest high-end gaming smartphone which is equipped with a Snapdragon 8 Gen 1 flagship chipset, an internal liquid cooling system, magnetic pop-up triggers and more. It’s also worth pointing out that it is actually a rebranded Redmi K50 Gaming, a phone that is currently exclusive to the Chinese market.

Under its hood is the aforementioned 5G-enabled Snapdragon 8 Gen 1 SoC, paired together with up to 12GB of LPDDR5 RAM and up to 256GB of UFS 3.1 internal storage. Meanwhile, powering the phone is a 4,700 mAh dual-cell battery with 120W fast charging support via USB-C, which POCO claims is able to top-up its capacity to 100% with just 17 minutes of charging (or 27 minutes while gaming). Besides that, it also comes with Bluetooth 5.2, NFC and WiFi 6E connectivity, as well as Android 12 out of the box via MIUI 13.

Imaging-wise, on the back of the POCO F4 GT is a triple camera array (with a cool RGB lighting gimmick) which consists of a 64MP Sony IMX686 primary shooter, 8MP ultrawide, and a 2MP macro sensor. Housed within the display’s punch-hole cutout, on the other hand, is a 20MP Sony IMX596 front-facing camera.

The POCO F4 GT is slated to arrive in Malaysia on 28 April 2022, available in three colour options: Stealth Black, Knight SIlver, and Cyber Yellow. The phone is set to retail at RM2,299 for the 8GB + 128GB configuration, and RM2,499 for the 12GB + 256GB. It’s worth noting that the pricing for its lowest configuration currently makes it the most affordable gaming smartphone with Snapdragon 8 Gen 1 chipset to be available for the local market.

Those interested can purchase the new F4 GT via the brand’s official online stores on Shopee and Lazada. POCO also notes that for a limited time from 28 April onwards, the F4 GT will also be offered at a special early bird discounted price of RM 1,999 for the 8GB + 128GB and RM 2,199 for the 12GB + 256GB, provided that stocks last.