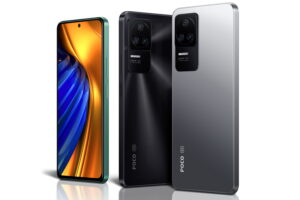 From the name, you may think that it is just a toned-down POCO F4 GT that was released in Malaysia back in April. In a way, you are correct since the POCO F4 has a less powerful processor but on another hand, the new model features an exterior design that is completely different from the GT version.

Let’s first track back our way to its specifications: the new F4 is running on a Qualcomm Snapdragon 870 while it also features a 6.67-inch AMOLED display that has a refresh rate up to 120Hz together with a 360Hz touch sampling rate. Protected by a layer of Corning Gorilla Glass 5, the Full HD+ display is also able to support HDR10+ and Dolby Vision contents.

For photography, the F4 relies on a 64MP f/1.79 main camera that also has an optical image stabilization system which apparently a first for a POCO phone. The rear camera module also contains an 8MP f/2.2 ultra-wide camera and a 2MP f/2.4 macro camera while there is also a 20MP f/2.45 front facing camera.

POCO has also equipped a 4500mAh battery into the F4 which supports a fast charger with a rating of up to 67W. In case you are wondering, yes, the company has provided a 67W charger with the phone that allows it to be fully charged with just 38 minutes of charging time.

As mentioned earlier, the F4 looked rather different from the older F4 GT. The X-shaped silhouette is totally absent from the new model while at the same time, all of its three rear cameras are being positioned in a circular housing that is stacked on another rectangular module.

However, the phone will be released in Malaysia on 27 June at a slightly lower price of RM1,499 and RM1,599, respectively. Available exclusively through POCO’s official store on Shopee, this offer will be valid while stocks last according to the company.

The post POCO F4 Is Coming To Malaysia For As Low As RM1,499 appeared first on Lowyat.NET.