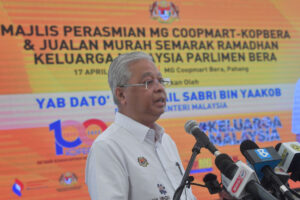 Prime Minister Ismail Sabri Yaakob has urged airline companies to not take advantage of festive seasons in order to make excessive profits by raising ticket prices to East Malaysian states. His comment regarding the matter was issued yesterday during his speech when opening Pasaraya MG Coopmart and the Semarak Ramadan Keluarga Malaysia sale for the Bera parliamentary constituency in Pahang.

As you may recall, local airline companies caused quite a stir last week after consumers voiced their concerns regarding high ticket prices when booking flights to Sarawak and Sabah for the upcoming Hari Raya celebrations. According to a report by Bernama, airfares to both states had increased over 500%, with prices reportedly reaching over RM 2,000 for return flights.

Ismail Sabri described the increased airfares as “extreme” and noted that people had no other alternative to travel to East Malaysia other than to take flights. In light of this, he has asked both domestic trade and consumer affairs minister Alexander Nanta Linggi to investigate if there was any violation under the Price Control and Anti-Profiteering Act 2011.

“The ministry must be firm against any party, no matter big or small, that makes excessive profits under the law,” he said. “Immediate action must be taken to safeguard the interests of the people.”

In addition, the prime minister revealed that he had also asked the ministry of transport to resolve the matter with airline companies. As reported prior to this, transport minister Wee Ka Siong already held a special meeting with involved parties last week to discuss the issue.