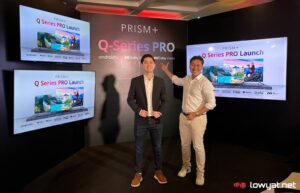 Back in February, PRISM+ introduced its Q-Series 4K Android TV in Malaysia by launching the massive 86-inch Q86 Pro QE. Today, the Singaporean company has officially expanded the series by adding two more options in the form of Q65 Pro QE and Q55 Pro QE.

As you can tell from their names, these two models are essentially the 65 and 55-inch variants of the series. Since they came from the same family, both models have pretty much the same ZeroBezel design and features as per its older 86-inch sibling albeit with smaller screen size.

Pre-installed with Android TV 10 which provides them with Google Play, Google Assistant, and built-in Chromecast support, both Q65 Pro QE and Q55 Pro QE feature IPS panel that offers backlight technology that PRISM+ called Quantum Colour. However, they don’t have a high refresh rate panel and are limited to 60Hz.

Despite that, all models under the Q Series Pro do support HDR10 and Dolby Vision contents. A digital TV tuner also comes standard with all Q Series Pro Android TVs for users out there that would like to tune to Freeview TV whenever they are bored with their streaming service.

When it comes to audio enhancements, the Q65 Pro QE and Q55 Pro QE offer Dolby Atmos and DTS TruSurround. A pair of 10W speakers has also been equipped in all models across the Q Series Pro family alongside support for dual-band Wi-Fi and Bluetooth 5.0.

They will also be provided with a free 12-month Viu subscription alongside 3-months free subscription for WeTV and meWatch. Those who opted for the Q65-QE Pro will also receive a free Logitech K400 wireless keyboard.

Just like the company’s previous monitors and smart TVs, the new Q65 Pro QE and Q55 Pro QE can be obtained directly from PRISM+ Malaysia’s website. Alternatively, they can also be obtained through the brand’s official Lazada and Shopee stores.