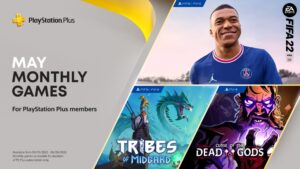 April is a rough month for PS Plus subscribers since we only get two games this month. Though it looks like next month will be a return to a more normal schedule, with three games being listed as bonuses. Though the list itself isn’t all that exciting.

Probably the best game on the list, subjectively speaking, of course, is Tribes of Midgard. It’s an interesting survival RPG that allows a party – or tribe – of up to 10 players. Though the amount of fun you can have hinges on the number of players you can have in one session. For what it’s worth, PS Plus subs can claim this on either the PS4 or PS5.

Next on the list is a PS4-only title, Curse of the Dead Gods. It’s a rogue-lite, which definitely isn’t a genre for everyone. The visual style is reminiscent of Hades, another rogue-lite title with a far more stellar reputation.

PlayStation Plus games for May:

Curse of the Dead Gods

Last on the list for PS Plus subs, and probably the least exciting of them all, is FIFA 22. PlayStation even had to spice up the offer by including a bonus FUT pack, but that’s certainly not a rabbit hole you want to dive too deep into. It’s available for both the PS4 and PS5.

These games will be claimable for PS Plus subscribers starting 3 May until 6 June 2022. If you haven’t claimed this months free games, then you should do soon, even if it’s a shorter-than-usual list.

The post PS Plus Free Games List For Subscribers In May 2022 Is Out appeared first on Lowyat.NET.