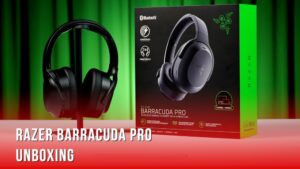 Razer launched the Barracuda X gaming headset last year. It was a strange launch for what was a new family of products. After all, the lineup started with the launch of the X version, usually designated as the more affordable option, before the base model. Now, just under a year after, the company has not only released an update to the original Barracuda X, but also launched the remaining members of the Barracuda family of headsets. This includes the Razer Barracuda Pro.

Being the top-of-the-line model, the Razer Barracuda Pro packs a few features that set it apart from the other models in the line. The key one being the Hybrid ANC tech. Where conventional ANC is divided into feedforward and feedback ANC, the Barracuda Pro combines the two so that you get the best of both worlds.

It’s also the only one in the lineup to feature the THX Achromatic Audio Amplifier DAC tech, which we also saw in the THX Onyx mobile DAC. The company claims that this means less distortion and improved battery life for the Razer Barracuda Pro. It is also the first to feature Razer’s new Bio-cellulose drivers, which further reduces distortion.

Other items on the spec sheet includes a weight of 340g, a battery life of 40 hours, support for THX Spatial Audio, dual integrated noise-cancelling mics, and dual wireless connectivity via 2.4GHz wireless and Bluetooth. It’s also worth noting that the  Barracuda Pro is the only one in the family to not have a 3.5mm audio jack. But on the flip side, it’s also the only one to come with a hard carrying case.

The Razer Barracuda Pro launched with a price tag of RM1399, but it will only be available at the end of June. We are also in the process of reviewing the gaming headset, so stay tuned for that.